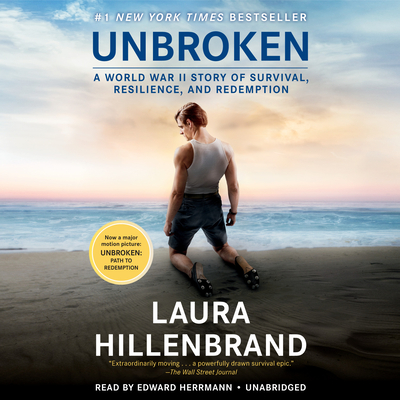 “Unbroken is a vivid story of Louis Zamperini who, as an athlete, ran in the 1936 Berlin Olympics and then became an airman when World War II broke out. When his plane crashed into the Pacific Ocean, he and two other crew members floated in a tiny raft across thousands of miles of ocean only to be rescued by the Japanese and placed in a POW camp. This book is about survival, emotional and physical endurance, hope, humor, and determination. An absolutely mesmerizing and incredible story.”
— Pam Clarke, Edgartown Books, Edgartown, MA

#1 NEW YORK TIMES BESTSELLER • The incredible true story of survival and salvation that is the basis for two major motion pictures: 2014’s Unbroken and the upcoming Unbroken: Path to Redemption.

On a May afternoon in 1943, an Army Air Forces bomber crashed into the Pacific Ocean and disappeared, leaving only a spray of debris and a slick of oil, gasoline, and blood. Then, on the ocean surface, a face appeared. It was that of a young lieutenant, the plane’s bombardier, who was struggling to a life raft and pulling himself aboard. So began one of the most extraordinary odysseys of the Second World War.

The lieutenant’s name was Louis Zamperini. In boyhood, he’d been a cunning and incorrigible delinquent, breaking into houses, brawling, and fleeing his home to ride the rails. As a teenager, he had channeled his defiance into running, discovering a prodigious talent that had carried him to the Berlin Olympics and within sight of the four-minute mile. But when war had come, the athlete had become an airman, embarking on a journey that led to his doomed flight, a tiny raft, and a drift into the unknown.

Ahead of Zamperini lay thousands of miles of open ocean, leaping sharks, a foundering raft, thirst and starvation, enemy aircraft, and, beyond, a trial even greater. Driven to the limits of endurance, Zamperini would answer desperation with ingenuity; suffering with hope, resolve, and humor; brutality with rebellion. His fate, whether triumph or tragedy, would be suspended on the fraying wire of his will.

In her long-awaited new book, Laura Hillenbrand writes with the same rich and vivid narrative voice she displayed in Seabiscuit. Telling an unforgettable story of a man’s journey into extremity, Unbroken is a testament to the resilience of the human mind, body, and spirit.

“[A] one-in-a-billion story . . . designed to wrench from self-respecting critics all the blurby adjectives we normally try to avoid: It is amazing, unforgettable, gripping, harrowing, chilling, and inspiring.”—New York

“Staggering . . . mesmerizing . . . Hillenbrand’s writing is so ferociously cinematic, the events she describes so incredible, you don’t dare take your eyes off the page.”—People

“Marvelous . . . Unbroken is wonderful twice over, for the tale it tells and for the way it’s told. . . . It manages maximum velocity with no loss of subtlety.”—Newsweek

“Moving and, yes, inspirational . . . [Laura] Hillenbrand’s unforgettable book . . . deserve[s] pride of place alongside the best works of literature that chart the complications and the hard-won triumphs of so-called ordinary Americans and their extraordinary time.”—Maureen Corrigan, Fresh Air

“Hillenbrand . . . tells [this] story with cool elegance but at a thrilling sprinter’s pace.”—Time

“Unbroken is too much book to hope for: a hellride of a story in the grip of the one writer who can handle it.”—Christopher McDougall, author of Born to Run

Laura Hillenbrand is the author of the #1 New York Times bestseller Unbroken: A World War II Story of Survival, Resilience, and Redemption, and Seabiscuit: An American Legend, which was a finalist for the National Book Critics Circle Award, won the Book Sense Nonfiction Book of the Year award and the William Hill Sports Book of the Year Award, landed on more than fifteen best-of-the-year lists, and inspired the film Seabiscuit, which was nominated for seven Academy Awards, including Best Picture. She served as a consultant on the Universal Pictures feature film based on Unbroken. Hillenbrand’s New Yorker article, “A Sudden Illness,” won the National Magazine Award. Her work has also appeared in such publications as the New York Times, Vanity Fair, the Washington Post, and the Los Angeles Times. She and actor Gary Sinise were cofounders of Operation International Children, a charity that provided school supplies to children through American troops.

Edward Herrmann was an Emmy Award®–winning and Tony® Award–nominated actor. He was known for his theater performances in such plays as The Philadelphia Story and Love Letters, as well as his film and television roles in Are You Here, Intolerable Cruelty, The Aviator, Gilmore Girls, and The Practice. He passed away in December 2014.