The Last Enforcer: Outrageous Stories From the Life and Times of One of the NBA's Fiercest Competitors (Paperback) 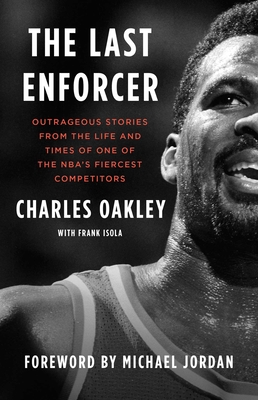 In this “incredible read on some incredible days and nights in the old association” (Adrian Wojnarowski, ESPN senior NBA insider) Charles Oakley—one of the toughest and most loyal players in NBA history—tells his unfiltered stories about his basketball journey and his relationships with Michael Jordan, LeBron James, Charles Barkley, Patrick Ewing, Phil Jackson, Pat Riley, James Dolan, Donald Trump, George Floyd, and many others.

If you ask a New York Knicks fan about Charles Oakley, you better prepare to hear the love and a favorite story or two. But his individual stats weren’t remarkable, and while he helped power the Knicks to ten consecutive playoffs, he never won a championship. So why does he hold such a special place in the minds, hearts, and memories of NBA players and fans?

Because over the course of nineteen years in the league, Oakley was at the center of more unbelievable encounters than Forrest Gump, and nearly as many fights as Mike Tyson. He was the friend you wish you had, and the enemy you wish you’d never made. If any opposing player was crazy enough to start a fight with him, or God forbid one of his teammates, Oakley would end it.

“I can’t remember every rebound I grabbed but I do have a story—the true story—of just about every punch and slap on my resume,” he says.

In The Last Enforcer, Oakley shares one incredible story after the next—all in his signature “unflinchingly tough, honest, and ultimately endearing” (Harvey Araton, New York Times bestselling author) style—about his life in the paint and beyond, fighting for rebounds and respect. You’ll look back on the era of the 1990s NBA, when tough guys with rugged attitudes, unflinching loyalty, and hard-nosed work ethics were just as important as three-point sharpshooters. You’ll feel like you were on the court, in the room, can’t believe what you just saw, and need to tell everyone you know about it.

Charles Oakley played nineteen seasons in the NBA. He started his professional career in 1985 with the Chicago Bulls, where he became teammate, protector, and close friend to Michael Jordan, and was selected to the NBA All-Rookie First Team. In 1988, he was traded to the New York Knicks, where he formed a starting lineup with fellow NBA All-Stars Patrick Ewing, John Starks, and Mark Jackson. The Knicks made the playoffs in each of the ten seasons Oakley was there. Oakley continued his career with three seasons on the Toronto Raptors, and retired in 2004 after playing additional seasons with Chicago, Washington, and Houston. He has given time and support to more than a hundred charities, and today can often be found cooking for people in impoverished and underprivileged communities through his Charles Oakley Foundation, a nonprofit that organizes fundraisers and community-building events. He splits his time between Atlanta, New York, and Cleveland, where he grew up.

Frank Isola spent twenty-five years covering the NBA and the New York Knicks at the Daily News (New York). His coverage earned him both an APSE sports writing award, as well a Deadline Club award. In 2015 he was voted New York Sportswriter of the Year. He currently is a regular on ESPN programs Around the Horn and Pardon the Interruption. He also serves as the cohost on a morning show for SiriusXM NBA Radio, and as a studio analyst for the Nets in the YES Network.

“No player embodied the swaggering ethos of the ’90s Knicks more than Oakley … Some athletes melt under Broadway’s stage lights; Oakley thrived. His gritty play befitted the city’s ‘if I can make it there’ self-image … A childhood friend calls Oakley ‘arrogantly honest,’ a description he embraces, and that captures the appeal of his new memoir.”
—THE NEW YORK TIMES

“They don’t make ‘em like Charles Oakley no more. When the NBA was full of these tough guys, one guy was tougher than the rest. In The Last Enforcer, Oak gives us insight into how it all went down when the game was won and lost in the paint, before flagrant fouls and three-pointers softened up the NBA. You had to be there, and he was right in the center of it, like an oak tree in the middle of a raging flood.”
—ICE CUBE, award-winning rapper, actor, and filmmaker

“This is the book we’ve been waiting on: Oak with Isola, delivering the goods on the golden age of NBA tough guys and blood feuds. An incredible read on some incredible days and nights in the old association.”
—ADRIAN WOJNAROWSKI, ESPN Senior NBA Insider and New York Times bestselling author of The Miracle of St. Anthony

“Mr. Charles Oakley is one of my guys from those great New York Knickerbockers of Patrick Ewing, John Starks, Larry Johnson, and Allan Houston. After all these years, Oak and I are still close friends. When you have Charles for a friend you have a loyal friend for life. The interesting thing is, he has a reputation as The Enforcer, but his book shows that Charles is funny AF – the humor is on point. On top of that, he’s a gourmet chef. You can never go wrong with laughter and food.”
—SPIKE LEE, Oscar-winning director and writer

“In The Last Enforcer, Charles Oakley, as fierce a competitor as ever stepped onto the hallowed floor in Madison Square Garden, tells the story of his career and life as he played: unflinchingly tough, honest, and ultimately endearing. An old-school warrior serves up a sizzling tale of life inside the paint in an era when that was where the game was won or lost. I couldn’t put it down.”
—HARVEY ARATON, New York Times bestselling author of Driving Mr. Yogi, and When the Garden Was Eden

“Basketball fans will enjoy Oakley’s stories about the game’s biggest stars and his opinions about them. . . The book is packed with Oakley’s plainspoken disdain for former players, most notably Charles Barkley, who gets a whole chapter: ‘Barkley and his Big Mouth.’ Among the other players and coaches on the receiving end of Oakley’s unforgiving eye include Lamar Odom, Dennis Rodman, Lenny Wilkins, and Tyrone Hill . . . Many of Oakley’s entertaining stories go beyond basketball; the strongest sections involve amusing run-ins with a wide range of celebrities, from Judge Mathis to Spike Lee. Oakley also has a serious side, on display when he discusses his friendship with George Floyd.”
—KIRKUS

“Oakley’s unapologetic, uninhibited autobiography, written with journalist [Frank] Isola, matches his dominant presence on the court . . . Of particular interest are his thoughts and experiences as a Black athlete, including his connection with police brutality victim George Floyd. Fondly remembered for his loyalty to teammates and his innovative defensive presence, Oakley’s stories bring back an era when basketball personalities and feuds were over the top and games were front-page news.”
—LIBRARY JOURNAL

“An entertaining stroll down memory lane … Anchored with a foreword by Michael Jordan—who refers to the author as his ‘bodyguard’ during their time as teammates on the Chicago Bulls—Oakley’s book skims over his youth and early love of the game to instead regale readers with tales from his playing days in the 1980s and ’90s and his decade-long tenure with the Knicks, replete with cameos by the likes of Donald Trump. He also weighs in on a considerable amount of gossip, opening the book with the claim ‘I did not punch Charles Barkley.’”
—PUBLISHER’S WEEKLY