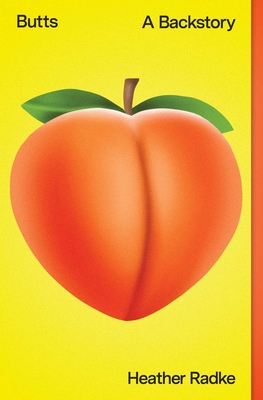 “A deeply thought, rigorously researched, and riveting history of human butts. Radke knows exactly when to approach her subject with levity and when with gravity. A pitch perfect debut.” —Melissa Febos, bestselling author of Girlhood and Body Work

Whether we love them or hate them, think they’re sexy, think they’re strange, consider them too big, too small, or anywhere in between, humans have a complicated relationship with butts. It is a body part unique to humans, critical to our evolution and survival, and yet it has come to signify so much more: sex, desire, comedy, shame. A woman’s butt, in particular, is forever being assessed, criticized, and objectified, from anxious self-examinations trying on jeans in department store dressing rooms to enduring crass remarks while walking down a street or high school hallways. But why? In Butts: A Backstory, reporter, essayist, and RadioLab contributing editor Heather Radke is determined to find out.

Spanning nearly two centuries, this “whip-smart” (Publishers Weekly, starred review) cultural history takes us from the performance halls of 19th-century London to the aerobics studios of the 1980s, the music video set of Sir Mix-a-Lot’s “Baby Got Back” and the mountains of Arizona, where every year humans and horses race in a feat of gluteal endurance. Along the way, she meets evolutionary biologists who study how butts first developed; models whose measurements have defined jean sizing for millions of women; and the fitness gurus who created fads like “Buns of Steel.” She also examines the central importance of race through figures like Sarah Bartmann, once known as the “Venus Hottentot,” Josephine Baker, Jennifer Lopez, and other women of color whose butts have been idolized, envied, and despised.

Part deep dive reportage, part personal journey, part cabinet of curiosities, Butts is an entertaining, illuminating, and thoughtful examination of why certain silhouettes come in and out of fashion—and how larger ideas about race, control, liberation, and power affect our most private feelings about ourselves and others.

Heather Radke is an essayist, journalist, and contributing editor and reporter at Radiolab, the Peabody Award­–winning program from WNYC. She has written for publications including The Believer, Longreads, and The Paris Review, and she teaches at Columbia University’s creative writing MFA Program. Before becoming a writer, Heather worked as a curator at the Jane Addams Hull-House Museum in Chicago.

“This crackling cultural history melds scholarship and pop culture to arrive at a comprehensive taxonomy of the female bottom. … Radke leaves no stone unturned… Lively and thorough, Butts is the best kind of nonfiction—the kind that forces you to see something ordinary through completely new eyes.”
— Esquire, Best Books of 2022 So Far

“Deeply reported and wildly entertaining… Radke takes readers through an absorbing cultural history that asks how this human body part came to be on the receiving end of so much attention.”

“Butts: A Backstory traces a complicated fascination from Empire-era spectacle to MTV. . .  A contoured yet amply scaled study.”
— Vanity Fair

“An ambitious mash-up of pop culture, science, and history, this breakout debut from Radiolab reporter Radke tracks the evolution of attitudes toward women’s butts from the “Hottentot Venus” to Miley Cyrus. Along the way, Radke delves into eugenics, hip-hop aesthetics, the physiology of posteriors, and more. It adds up to one of the year’s most ingenious and eye-opening cultural studies.”
— Publishers Weekly, Best Books of 2022

“By all rights, this could have been an asinine bathroom book, full of paper-thin factoids and cheeky humor, but Heather Radke has a brain that just won’t quit. A funny and studious storyteller, the Radiolab reporter leads us on an eye-opening journey that starts in Kenya 1.9 million years ago, where “the first known hominid with a butt” enters the fossil record, and marches through centuries of changing art, fashion, and cultural norms to the modern era where the dreams of Sir Mix-a-Lot are finally being realized. But what is a butt, biologically speaking? And how did it become such a hot-button issue in conversations about race, gender, and class? The butt, as it turns out, occupies a prominent space in the human story even though, as Radke points out, we rarely get a good look at our own.”
— The Philadelphia Inquirer, Best New Books of November

“As women we have always been asked—been told—to lie about our bodies. Our culture subjects them to laws, myths, race bigotries, class pieties and sexual anxieties.  With Butts: A Backstory, journalist and critic Heather Radke takes up these lies and takes them apart. The result is a bold and exuberant leap for womankind.”
— Margo Jefferson, Pulitzer Prize-winning critic and author of Negroland and&

“Heather Radke’s Butts: A Backstory is rigorous, generous, and utterly compelling. The range of its research is thrillingly expansive—from the deep origins of twerk to the sleek silhouettes of Coco Chanel, from the “mono-bum” of the Victorian bustle to the brilliant subversions of drag—allowing Radke a range of fascinating vantage points from which to explore the histories our bodies hold. With humor, intelligence, outrage, and compassion, Radke excavates the social and historical forces that haunt our most ordinary moments. This fiercely intelligent, frequently witty "backstory" is a journey through centuries of history that will transform how you think about the butt, and—quite possibly—how you consider the value of exploring those parts of ourselves we don’t take seriously enough.”
— Leslie Jamison, bestselling author of Make It Scream Make It Burn and Th

“From the first, I have been delighted and deeply informed by Heather Radke's writing. She has a mind like no other. This book contributes not only a great deal to the complicated discussion around women's bodies, it illuminates what unites us all: being human.”

“Juicy and scholarly, Butts is a heck of a ride. At turns troubling, wild, painful, surprising and flat-out fun, Radke’s reporting unearths a set of largely overlooked historical figures with outsized effects on cultural evolutions, from the discovery of the first hominid butt, to the creation of the frightening statues Norm and Norma, to the gruesome tale behind the bustle, these gripping stories work together to elucidate the crushing web of cultural, commercial, and pseudoscientific forces shaping our very private senses of discomfort, envy, and belonging. Her book is teeming with rebels—drag queens and fat activists and twerkers—who flip supremacy the bird and offer another path through. Don’t let the cute cover fool you, inside is a serious feat of reporting and scholarship.”
— Lulu Miller, bestselling author of Why Fish Don't Exist