Where the Line Bleeds (Paperback) 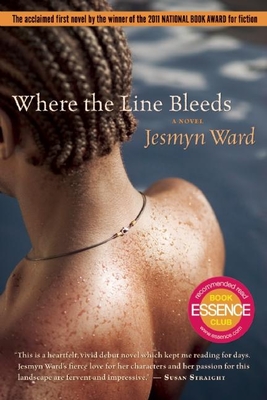 By Jesmyn Ward
Email or call for price
Out of Print

Joshua and Christophe are twins, raised by a blind grandmother and a large extended family in a rural town on Mississippi's Gulf Coast. They've just finished high school and need to find jobs, but in a failing post-Katrina economy, it's not easy. Joshua gets work on the docks, but Christophe's not so lucky. Desperate to alleviate the family's poverty, he starts to sell drugs. He can hide it from his grandmother but not his twin, and the two grow increasingly estranged. Christophe's downward spiral is accelerated first by crack, then by the reappearance of the twins' parents: Cille, who abandoned them, and Sandman, a creepy, predatory addict. Sandman taunts Christophe, eventually provoking a shocking confrontation that will ultimately damn or save both twins. Ward inhabits these characters, and this world -- black Creole, poor, and drug-riddled, yet shored by family and community-- to a rare degree, without a trace of irony or distance.

"I feel like I have read the debut work of the next Faulkner, or Capote, or O’Connor, a great Southern writer whom my children might some day read in their college classes." Kenneth Jones, Oxford Eagel

"A resonant novel for any reader." Booklist

"Ward’s beautiful language allows the location and characters to come alive...will appeal to teens who can see themselves here or who are interested in discovering realities far from their own lives." —School Library Journal

"A lyrical yet clear-eyed portrait of a rural South and an African-American reality that are rarely depicted." Anna Mundow, Boston Globe

"The greatest strength of this novel is Ward's ability to capture in perfect nuance the smallest gestures and details of setting in order to bring the world she depicts to life, often through the wordless way in which the characters communicate." Jennifer Deitz, Palo Alto Weekly

"Bursting with life - joyous, loving, frustrated and furious - Where the Line Bleeds marks the forceful debut of an exceptional new talent. Jesmyn Ward's vision is at once searingly honest and sweepingly empathic. Her vibrant portrait of a Mississippi Gulf Coast town is peopled by some of the most movingly, achingly human characters I've encountered in fiction in years." Peter Ho Davies, author of The Welsh Girl

"Jesmyn Ward's debut novel is eloquent in its description of young lives at risk; she's authoritative both when writing of the doomed and prospect of salvation. The lyric gifts displayed in Where The Line Bleeds are very impressive indeed, and the world evokedthe rural south, with its complex web of family devotion and betrayalis vivid from first page to last. A major talent here." Nicholas Delbanco, author of Spring and Fall, and The Count of Concord

"Where the Line Bleeds is a rich, subtle, lyrical novel by an important new writer. Jesmyn Ward writes with a miniaturist's attention to detail, with dazzling elegance and precision, but is unwaveringly compassionate in her exploration of character and place. There is suspense here, along with keen insightthe qualities that keep the pages turning. But there is also poetry, and mysterythe qualities that cause the reader to linger in wonder." Laura Kasischke, author of The Life Before Her Eyes