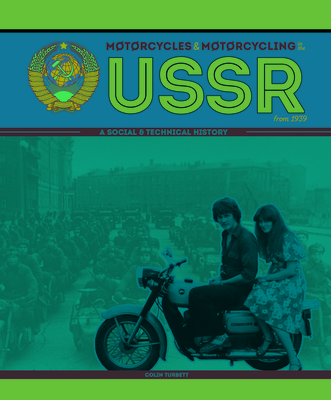 By Colin Turbett
Email or call for price
Special Order

Motorcycles and Motorcycling in the USSR from 1939 provides the first accessible English language account of motorcycles in the Soviet Union. Concentrating on the wartime and postwar period until 1990, prior to the dissolution of the USSR in 1991, it covers the motorcycles produced, and looks at the way in which they were used at home and exported abroad. Chapters cover wartime, models produced, the social character of Soviet era motorcycling, and wide-ranging sport. With planned rather than market-led production based around copies of pre-war German BMW and DKW models, the industry churned out hundreds of thousands of utilitarian and rugged machines that were very different from the more fashion-orientated machines produced in the West. These motorcycles went under the place names of the producing factories: Ishevsk, Kovrov, Moskva, Minsk and, of course, the large flat twins produced in Irbit and Kiev under the Ural and Dnepr names. With a strong emphasis on Soviet era illustrations, the book provides an insight into a life, based on idealism and ideology that has now passed. Photographs and images, many of them from private family collections, show Soviet bikes as well as popular imports Jawa from Czechoslovakia, and Pannonia from Hungary.

Colin Turbett got his first motorcycle at age 15 and has owned, built, and cried over mostly British bikes ever since. He currently looks after a 1949 BSA Gold Star, as well as a modern bike.  Colin spent a long career in social work in the West of Scotland through which he was a successful textbook author. In recent years motorcycle trips to Eastern Europe have triggered an interest in the utilitarian machines produced there during the Communist years. He has always been interested in the history of the Soviet Union, and this book brings several of his passions together.

Motorcycles and Motorcycling in the USSR from 1939: A Social and Technical History (Hardcover)