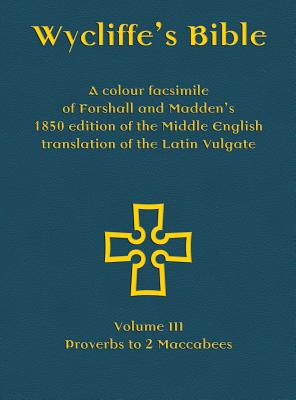 Forshall and Madden's 1850 edition of Wycliffe's Bible has long been out of print. It is very scarce and those rare copies that are available from antiquarian booksellers tend to vary both in condition and in cost. This facsimile edition contains the entire text in a sturdy binding and will be suitable for students of Middle English as well as those interested in the history of the English bible.

The two translations given below are conventionally designated "Wycliffe's Bible" or "the Wycliffite Bible" because John Wycliffe (c. 1328-31 December 1384) was inspired to render Jerome's Latin Vulgate into the spoken language of the English people, that they might be better able to understand the scriptures. Today we know that Nicholas of Hereford (died c. 1420) worked extensively on the translation of the Old Testament, completing it by 1382. John Purvey (c. 1354-16 May 1414) was probably responsible for revising the "early" translation (produced during Wycliffe's lifetime) to the more idiomatic "later" translation, which exhibits less influence from Latin syntax. It is also possible that Cornishman John Trevisa (1342-1402) participated in the earlier translation; indeed the preface to the 1611 King James Bible mentions that Trevisa, a contemporary of Wycliffe, was involved in translating the Gospels into English.

Josiah Forshall (29 March 1795-18 December 1863) and Frederic Madden (16 February 1801-8 March 1873) worked for twenty-two years on their remarkable edition. The early translation is given in the left-hand column, and the later translation in the right. In their text they retained the letter yogh (Ȝ ȝ) throughout but, curiously, replaced the letter thorn ( ) with the digraph th. A glossary of Middle English words is given at the end of Volume IV.

The table of contents gives the names of both the canonical and deuterocanonical books as Forshall and Madden gave them. Where the modern names differ, they are given between parentheses in italic type.

At the end of Volume IV there was originally an oddity in the pagination of the back-matter. The end of the book of Apocalypse was on page 681, followed by a blank page 682. Immediately following this was a section of Additional Prologues at pages 681b-695b, after which followed a Table of Lessons pages 683-698, a Glossary pages 699-749, a blank page 750, and a Correction page 751. In this edition the Additional Prologues have been moved to pages 751-765 after the Glossary, and the Correction page has been kept as the final page redundantly at the end of each volume, although all of the specified corrections have been applied to the relevant pages (all but one which could not be found, at II p. 546 c. I. l. 22, amending te to the). Guide-words have also been added to the headers in the Glossary.

Wycliffe's Bible - A colour facsimile of Forshall and Madden's 1850 edition of the Middle English translation of the Latin Vulgate: Volume III - Prove (Hardcover)