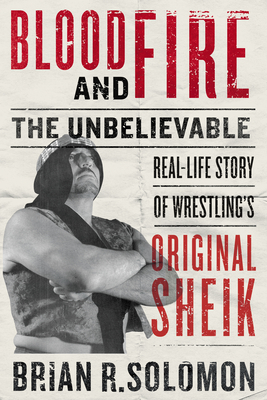 The captivating story of how The Sheik captured the imagination of a generation, conquered the wrestling business, and lost it all in a blaze of flame and glory

He was the most vicious, bloodthirsty, reviled villain in the history of the ring. During the 1950s, 1960s, and 1970s, he drew record crowds everywhere he went and left a trail of burned and bloody opponents in his wake. He was The Sheik: the mysterious and terrifying madman from Syria whose wanton destruction and mayhem are the stuff of wrestling legend. But what those legions of fans screaming for his head never knew was that The Sheik was really Eddie Farhat.

From Lansing, Michigan, and the son of Arab immigrants, Farhat served his country proudly in World War II and was fulfilling the American dream through hard work and tireless dedication to his craft. And when he wasn't screaming unintelligibly and attacking his enemies with sharp objects, he was busy being the owner and operator of World Wide Sports, one of the most successful wrestling companies in North America.

This is Blood and Fire: The Unbelievable Real-Life Story of Wrestling's Original Sheik.

Brian R. Solomon is an educator and the author of several books on sports and entertainment. He is a regular contributor to Pro Wrestling Illustrated and Inside the Ropes, and the co-host of the PWI Podcast. For seven years, he was an editor for WWE. He lives in Connecticut with his wife and son.