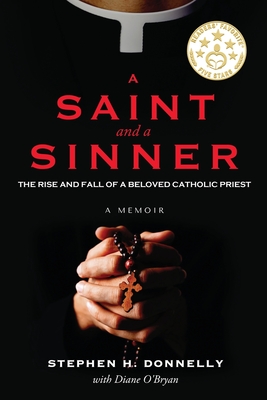 Ex-priest Stephen H. Donnelly's memoir, A Saint and a Sinner, is an immersive experience into the world of a Catholic priest and a brutally honest account of Stephen's journey of sinfulness; a cautionary tale of the struggle between good and evil that exists within all of us. At age 42, Stephen was ordained a Roman Catholic priest. As he stood before God, the bishop, and the congregation, he made promises he struggled to keep. Three years into his priesthood, he descended into a world of cocaine and alcohol abuse.
Fellow priests intervened, and after multiple stints in rehab, Stephen turned his life around and became well-known in Alcoholics Anonymous circles as the "Irish priest with a problem. During his seven years as Associate Pastor of St. Patrick's Church, Huntington, New York, he became known among parishioners as a "rock star." They were among the best years of his priesthood. He was Stephen: the man, the Catholic, and the priest at his absolute best. But in 2018, while assigned to a new parish, the unthinkable happened, and it threatened to destroy everything he held dear.

A Saint and a Sinner: The Rise and Fall of a Beloved Catholic Priest (Paperback)