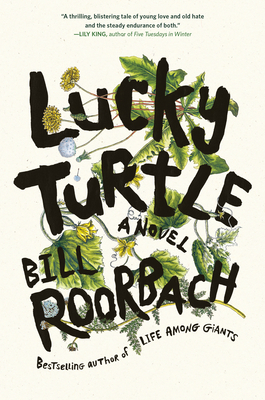 “An epic love story . . . No greater reading pleasure to be had anywhere.” —Kirkus Reviews, starred review

“No one writes about love or the American wilderness like Bill Roorbach . . . Thrilling.” —Lily King, author of Writers & Lovers and Five Tuesdays in Winter

When sixteen-year-old Cindra Zoeller is sent to a reform camp in Montana after being involved in an armed robbery, she is thrust into a world of mountains and cowboys and prayers and miscreants and people from all walks of life like she’s never seen in suburban Massachusetts. At Camp Challenge, she becomes transfixed by Lucky, a camp employee of mysterious origin—an origin of constant speculation—and the chemistry between them is instant, and profound. The pair escape together into the wilderness to create an idyllic life far from the reach of the law, living off their resounding love, Lucky’s vast knowledge of the wilderness, and a little help from some friends.

But they can run from the outside world for only so long, and the consequences of their naïve fantasy of a future together—and circumstances shaped by skin color—will keep them apart for decades. Cindra gets trapped in a relationship, safely if stultifyingly suburban, where she is both cosseted and controlled by a man who claims to be her rescuer. But for Cindra, there will never be another Lucky, and she dreams of one day finding him, the only man she’s ever fully trusted, her soulmate.

Page-turning, full of vivid characters, delicious suspense, and ultimately joy, Lucky Turtle is a big- hearted, deeply engrossing love story from one of our most entertaining and perceptive writers.

Bill Roorbach is the author of five previous books of fiction, including The Girl of the Lake, the Kirkus Prize finalist The Remedy for Love, the bestselling Life Among Giants, and the Flannery O’Connor Award–winning collection Big Bend. His memoir in nature, Temple Stream, won the Maine Literary Award in nonfiction. Roorbach has received fellowships from the Civitella Ranieri Foundation and the National Endowment for the Arts. He held the William H. P. Jenks Chair in Contemporary American Letters at the College of the Holy Cross in Worcester, Massachusetts. His craft book, Writing Life Stories, has been in print for twenty-five years. His writing has appeared in Harper’s, the New York Times Magazine, the Atlantic, Ploughshares, Granta, Ecotone, New York magazine, and other publications. He lives in Maine with his family.

“Fans of Roorbach’s prolific work will appreciate his signature lyricism and sense of place, his sweeping narrative, humor and romance. New readers are walking into the hands of a skilled storyteller who’s not afraid to take on a big, messy tale of love, privilege and abuse.”
—New York Times Book Review

“Nobody else could have written this gorgeous novel, full to the brim with tragedy but also fun, as well as the best kind of romance —embracing so much more than the couple at its center. Cindra is an impeccably loyal and honest narrator, our perfect guide through the wilds of Montana. Lucky Turtle is an ode and a love letter to our wounded, imperfect, and oh-so-beautiful world.”
—Nina de Gramont, author of The Christie Affair

“No one writes about love or the American wilderness like Bill Roorbach. A thrilling, blistering tale of young love and old hate and the steady endurance of both.”
—Lily King, author of Five Tuesdays in Winter

“Look out: Roorbach has created the sexiest man seen in literature in a good long time . . . An epic love story . . . No greater reading pleasure to be had anywhere.”
—Kirkus Reviews, starred review

​“Roorbach is a consummate raconteur skilled in breathing life into his characters. His prose is well-suited to the Montana landscape, capacious yet created with poetic economy, evoking the splendor of nature in language that sparkles like crystal clear mountain water . . . Roorbach’s understated, luminescent novel beautifully evokes an idyllic world created when two hearts are braided together.”
—Booklist, starred review

“Two great love affairs—one between characters, the other with the wilds of Montana as its original inhabitants knew it—surge through this engaging, audacious novel. Every page hums with life and energy.”
—Andrea Barrett, author of The Voyage of the Narwhal and Archangel

“At once an adventure, a love story, and a profound meditation on the grandeur of the natural world, Lucky Turtle is a novel so full of beauty and heart and pathos that you won’t want it to end, a book that hums with grace, and sings with passion. Roorbach is a national treasure.”
—Jonathan Evison, author of Small World

“Roorbach delivers a most electric pulse into the hardscrabble dirt and veins in this novel's memorable backdrop of ancient Montana mountains and waters. Lucky Turtle gives us a world where adventure and landscape combine tenderly for a most unforgettable read.”
—Aimee Nezhukumatathil, author of World of Wonders

“A story of love and heartbreak in a world of breathtaking splendor and deep injustice, Bill Roorbach's Lucky Turtle is a novel of perseverance, brimming with entertaining dialogue and rich details of the flora and fauna of the West.”
—Shelf Awareness

“A new kind of romance… [and] a love letter to the beauty and power of Montana… The tensions don’t simmer here but roil, making for an emotionally challenging, worthwhile and truly special read.”
—BookReporter

“A sweeping coming-of-age tale of romance – and heartbreak… An expansive and empathic novel.”
—Portland Press Herald and Central Maine