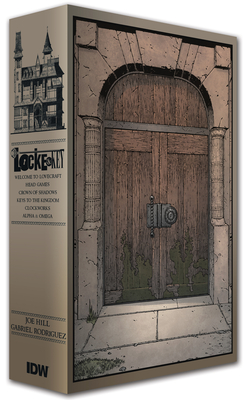 Now a Netflix original series! Unlock the mysteries of Keyhouse! The extraordinary tale of the Locke family is collected in its entirety in this handsome slipcase set. Includes all six softcover volumes of the Locke & Key series.

Named a "modern masterpiece" by The A.V. Club, Locke & Key tells a sprawling tale of magic and family, legacy and grief, good and evil. Acclaimed suspense novelist and New York Times-bestselling author Joe Hill (The Fireman, Heart-Shaped Box) has created a gripping story of dark fantasy and wonder—with astounding artwork from Gabriel Rodriguez—that, like the doors of Keyhouse, will transform all who open it.

Joe Hill is the #1 New York Times bestselling author of Full Throttle, The Fireman, Heart-Shaped Box, and NOS4A2, recently made into a TV series from AMC. His horror novella In the Tall Grass, co-written with Stephen King, was made into a feature film from Netflix. His book of short stories, 20th Century Ghosts, won the Bram Stoker Award and British Fantasy Award for Best Collection. He earned the Eisner Award for Best Writer for his long-running comic book series, Locke & Key, featuring the eye-popping art of Gabriel Rodríguez.

Born in Santiago, Chile, Gabriel Rodríguez began working as an illustrator in the late 90s and in 2002 started drawing books for IDW Publishing, including CSI, George Romero’s Land of the Dead, and Beowulf, amongst others. In 2007, he co-created the award-winning series Locke & Key with Joe Hill. He continued developing other creator-owned projects: the Eisner-winning Little Nemo: Return to Slumberland, with Eric Shanower; Sword of Ages; and the gritty sci-fi adventure Onyx, with Chris Ryall. In 2019, he partnered with Hill once again for two new Locke & Key stories, “Dog Days” and “Nailed It.”

"It's great! ...The art here by Gabriel Rodriguez is some of the finest stuff in comics today... The team of Hill and Rodriguez is top notch!" — Blair Butler, Fresh Ink

"In a year of auspicious comics debuts, Joe Hill turned in one of the few comics that truly came from a different place. Written with skill that makes me jealous, courage that makes me smile, and honesty and brutality that makes me want to see what comes next. Okay, I'm officially a fan." — Ed Brubaker