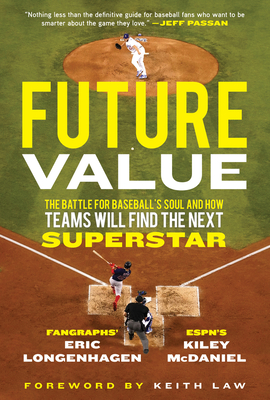 For the modern major league team, player evaluation is a complex, multi-pronged, high-tech pursuit. But far from becoming obsolete in this environment⁠—as Michael Lewis' Moneyball once forecast⁠—the role of the scout in today's game has evolved and even expanded. Rather than being the antithesis of a data-driven approach, scouting now represents an essential analytical component in a team's arsenal.

Future Value is a thorough dive into the world of the contemporary scout—a world with its own language, methods, metrics, and madness. From rural high schools to elite amateur showcases, from the back fields of spring training to major league draft rooms, FanGraphs' Eric Longenhagen and Kiley McDaniel break down the key systems and techniques used to assess talent. It's a process that has moved beyond the quintessential stopwatches and radar guns to include statistical models, countless measurable indicators, and a broader international reach. Practical and probing, discussing wide-ranging topics from tool grades to front office politics, this is an illuminating exploration of how to watch baseball and see the future.

Eric Longenhagen is the FanGraphs Lead Prospect Analyst. His career in baseball began in 2008, the youngest of the Lehigh Valley Iron Pigs' inaugural crop of interns. He'd go on to work at Baseball Info Solutions and begin writing for various publications, like Crashburn Alley and Sports on Earth, before contributing to ESPN's prospect coverage starting in 2015. He has been at FanGraphs since 2016.

Kiley McDaniel has worked for the Atlanta Braves, Pittsburgh Pirates, Baltimore Orioles, and New York Yankees, along with ESPN, FanGraphs, Fox Sports/Scout.com, and Baseball Prospectus. He began as an intern for the Yankees in baseball operations and his most recent club experience was as the assistant director of baseball operations and West Coast crosschecker for the Braves. He resides in Atlanta with his puppy, Scout, and currently writes for ESPN, either from a hotel room or his couch, next to Scout.

“Beautifully constructed... In the vacuum of sports-centered books, it’s hard to overstate the importance of Future Value; the book will have a wide-stretching impact both presently and in the near and distant future.” —Prospects 365

“In Future Value, Eric and Kiley give you the grand tour of scouting without asking you to leave your couch. They’ll walk you through the draft... the Wild West of international free agency... and professional scouting…. You couldn’t ask for a better pair of tour guides.” —Keith Law, senior baseball writer, The Athletic (from his foreword)

"True insight into how modern baseball operates is rare, which is what makes Future Value such an invaluable resource. It pulls back the curtain and answers every question needed to understand the game today. This is nothing less than the definitive guide for baseball fans who want to be smarter about the game they love." —Jeff Passan, writer, ESPN

“From scouting the basic tools to the integration of data to paint a more complete picture of a player, Eric and Kiley explore the wide array of strategies and methodologies used by Major League Baseball teams in their quest to identify the next impact player.” —Angels General Manager Billy Eppler

“Eric and Kiley make a compelling case for player evaluation via a modern marriage of analytics and the sometimes-harder-to-quantify insights of scouts.” —Reds General Manager Nick Krall

“I learned so much more about baseball than I ever knew before.” –Roxanne, Goodreads

“A fantastic look at the worlds of amateur scouting and prospect development. They go piece by piece, ranging from the draft to IFA to pro scouting and on to the data and technology revolutions in evaluation and development.” —Russel, Goodreads

“This is an interesting book that probably shares more about the current Major League Baseball front office and scouting cultures than almost any book out there.” –Albert, Goodreads

Future Value: The Battle for Baseball's Soul and How Teams Will Find the Next Superstar (Hardcover)