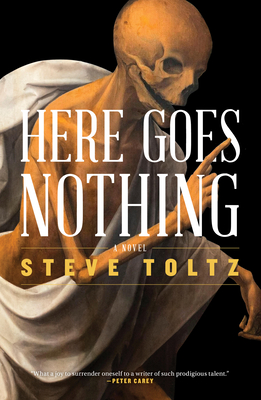 A wildly inventive, savagely funny and topical novel about love, mortality and the afterlife, by the Booker-shortlisted author of A Fraction of the Whole.

Angus is a reformed ne'er-do-well looking forward to the birth of his first child when he's murdered by a man who is in love with his pregnant wife Gracie. Having never believed in God, heaven or hell, Angus finds himself in the afterlife - a place that provides more questions than answers. As a worldwide pandemic finally reaches the shores of Australia, the afterlife starts to get very crowded and Angus finds a way to reconnect with his wife Gracie and maybe even seek revenge on his murderer...

Here Goes Nothing is a novel of exhilarating originality and scope about birth, death and everything in between and after by ‘a writer of prodigious talent’ (Peter Carey) that contains a vision of the afterlife that rivals Dante’s Divine Comedy and George Saunders' Lincoln in the Bardo, and the emmy-nominated The Good Place.

Steve Toltz was born in Sydney, Australia. A Fraction of the Whole, his first novel, was released in 2008 to widespread critical acclaim. It was shortlisted for the 2008 Man Booker Prize and the 2008 Guardian First Book Award. His equally acclaimed second novel Quicksand was published in 2015. He currently lives in Los Angeles and writes screenplays.

"...Clever lines drop down on these pages like flowers thrown on a casket...[a] zany, increasingly dark comedy..." -- The Washington Post

"Toltz... is smart, imaginative and funny, unafraid to lob a literary grenade into hard-held beliefs of humankind. He uses Here Goes Nothing as a jumping-off point to parody the perversity and stubbornness of human nature and to highlight our uneasy relationship with mortality. Think of it as a comic, modern-day Divine Comedy with more intercourse and fewer opportunities to reach Paradise." -- The Star Tribune

"Surreal, sharply funny and as dark as the grave. Fans of noir fiction and quirky thrillers ... will dig right in." -- Shelf Awareness

"With a stygian sense of humour, Toltz persuasively argues that humanity, for all the progress made, has achieved little of substance other than finding new ways of distracting itself as the world burns... Here Goes Noth­ing works because we care about Angus, Grace, and Owen. It would have been easy for Toltz to depict them as caricatures; instead, they are three wonder­fully flawed but sympathetic individuals." -- Locus Magazine

"Toltz’s wit and black humor transform a morbid premise into a rollicking ride. The result is an audaciously creative imagining of what awaits after death." -- Publishers Weekly

"Toltz (Quicksand, 2015) revels in the irony of an afterlife skeptic forced into a ghastly second act. Angus’ narration is thick with zingy one-liners pointing up the absurdity of it all... an exploration of big feels, among them the slow-spreading dread of societal cataclysm, the grief of watching one’s beloved embrace a new partner, and the fear that now may be as good as it gets." -- Booklist

"You may laugh or weep and be shocked or outraged, but you won’t be bored. You may even develop a greater understanding of human nature — even as it plays out in the hereafter." - The Washington Independent Review of Books

"Outlandishly satisfying and timely...this is highly intelligent reading of the tallest order with much to unpack." -- Bookreporter

"Here Goes Nothing is a thought-provoking work that’s perfect for anyone whose dim view of our planetary existence is tempered by hope in something better than a doctrinaire ending." -- Criminal Element