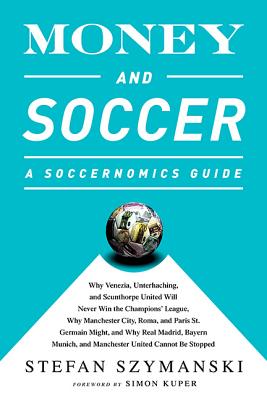 By Stefan Szymanski
Email or call for price
Special Order

Modern soccer is big business. From the ill-received takeover of Manchester United by the Glazer family to Paris Saint Germain's current shopping spree for the best footballers on the planet, soccer finance has become an increasingly important part of the game.

Barely a summer goes by now without a cherished club going into administration or a wealthy businessman funding a mid table team's ascension to Champions League competitor. Meanwhile, the twice-annual multi-million dollar merry-go-round of transfer season sees players (and now managers) signed for sums thought impossible just a decade ago. Understanding soccer finance has become essential for comprehending the beautiful game. But for many fans, soccer finance remains, frustratingly, a world that is opaque and difficult to grasp.

Stefan Szymanski, co-author of the bestselling Soccernomics, tackles every soccer fan's burning questions in Money and Soccer: A Soccernomics Guide. From the abolition of the maximum wage in the 1960s, through to the impact of TV money both at home and abroad in the 1990s and 2000s, Szymanski explains how money, or lack of, affects your favorite club. Drawing on extensive research into financial records dating back to the 1970s, Szymanski provides clear analysis of the way that clubs have transformed in the modern era.

This book isn't limited to European clubs. Szymanski, a renowned expert on sports management and economics, looks at what we can learn from comparing the ascension of Europe's biggest clubs to their lofty perches and with new financial models across the world. Through careful research and informative stories drawn from around the globe, Szymanski provides an accessible guide to the world of soccer finance.

Stefan Szymanski is the Stephen J. Galetti Collegiate Professor of Sport Management at the University of Michigan's School of Kinesiology. Tim Harford has called him "one of the world's leading sports economists." He lives in Ann Arbor, Michigan.

“ In a series of academic papers and his breakthrough book Soccernomics (2009), written with Simon Kuper, Szymanski has applied rigorous economic thinking to football. He has helped combat a sort of know-nothing view within the game that nothing could be learnt from numbers...For anyone interested in how football really works, both its central argument and many subsidiary ones make Money and Football powerful and entertaining.” —The Times [UK]

“Szymanski writes the definitive guide to the financial aspect of world football in this detailed analysis about a difficult topic for laymen to grasp… It will become our definitive reference source on the intricacies of football finance for many years to come.” —The Soccer Translator

“Another essential document from one of the top thinkers about modern-day sports.” —Booklist

“I regard Stefan Szymanski as a trusted and smart thinker on the soccer business. This is fast-moving industry, and he's one of the best guides to it.” —Billy Beane, General Manager of the Oakland A's—-

Money and Soccer: A Soccernomics Guide: Why Chievo Verona, Unterhaching, and Scunthorpe United Will Never Win the Champions League, Why Manchester City, Roma, and Paris St. Germain Can, and Why Real Madrid, Bayern Munich, and Manchester United Cannot Be Stopped (Paperback)