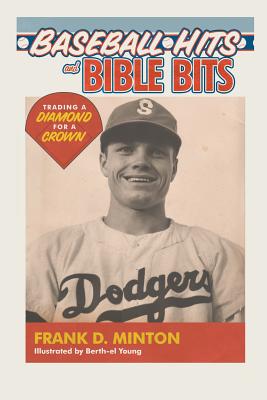 By Frank Minton
$19.99
Usually Available/Ships in 5-7 Business Days
This book is non-returnable.

In Baseball Hits and Bible Bits, pastor and former Minor League pitcher Frank D. Minton shares unforgettable stories and anecdotes about two of his great loves in lifebaseball and the Bible. When Minton was eleven years old, God called him to preach; that call to serve the Lord would never leave his heart. His north high school exploits on the ball fields of Wichita, Kansas, earned him a scholarship at the University of Oklahoma and eventually a contract with the Dodgers organization. After three years in the minors, he realized that following Gods call was more important than making it to the big leagues. He turned down the Dodgers contract offer for a fourth year, leaving baseball behind to become a Baptist minister. It was one of the most difficult decisions of his life, but according to Minton, he traded a diamond for a crown. Baseball poems and songs are sprinkled throughout, and sketches by artist Berth-el Young add dimension and feeling. With stories about baseball greats both past and presentsuch as Sandy Koufax, Josh Hamilton, and Albert Pujolsand rich autobiographical details of a life lived in the service of the Lord, Baseball Hits and Bible Bits has something for just about everybody: from little leaguers to bush leaguers to big leaguers.

Baseball Hits and Bible Bits: Trading a Diamond for a Crown (Paperback)