Walden: And Other Writings with Walking (Paperback) 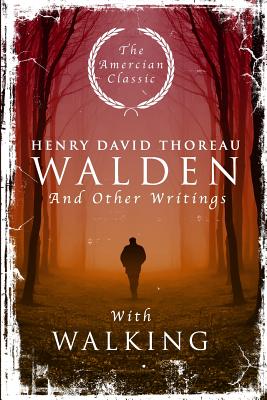 Walden, Henry Thoreau's classic account of life in a simple one-room cabin in New England remains, 150 years on, an anti-establishment masterpiece and a testament to individualism
wrote John Updike
Henry David Thoreau began the tale of his experiment of simple living at Walden Pond. Over the course of the next two hundred-odd pages, Thoreau outlined his philosophy of life, politics, and nature, laying the foundation for a secure place in the canon of great American writers. Although Walden enjoyed only moderate success in Thoreau's lifetime, his experiment at the pond would spark considerable interest in the years to come. The book has inspired other young people to follow his example and retire to a lonely spot--even if only in imagination--to ponder the world and their place in it. Thoreau's words expressed the concerns of many of his contemporaries as industrialization and war permanently altered the world around them, just as they struck a chord in a generation of young people in the 1960s and 1970s who opposed the modern military-industrial complex and sought peace and simplicity in their lives. For many, Walden has served as a touchstone. A century and a half after its publication, Walden has become such a totem of the back-to-nature, preservationist, anti-business, civil-disobedience mindset, and Thoreau so vivid a protester, so perfect a crank and hermit saint, that the book risks being as revered and unread as the Bible. Of the American classics densely arisen in the middle of the 19th century - Hawthorne's Scarlet Letter (1850), Melville's Moby-Dick (1851), Whitman's Leaves of Grass (1855), to which we might add Harriet Beecher Stowe's Uncle Tom's Cabin (1854) as a nation-stirring bestseller and Emerson's essays as an indispensable preparation of the ground - Walden has contributed most to America's present sense of itself. In a time of informational overload, of clamorously inane and ubiquitous electronic entertainment, and of a fraught, globally challenged, ever more demanding workplace, the urge to build a cabin in the woods and thus reform, simplify, and cleanse one's life - "to front," in Thoreau's ringing verb, "only the essential facts of life" - remains strong. The holiday industry, so-called, thrives on it, and camper sales, and the weekend recourse to second homes in the northern forests or the western mountains, where the pollutions of industry and commerce are relatively light. "Simplify, simplify," Walden advises, and we try, even though a 21st-century attainment of a rustic, elemental simplicity entails considerable complications of budget and transport.