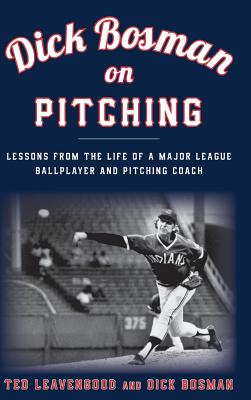 Dick Bosman's career in Major League Baseball as a player and coach has spanned more than 50 years. He pitched eleven seasons in the American League, was the Major League pitching coach for multiple teams, and has served as a minor league pitching coordinator for the Tampa Bay Rays since 2001. Throughout his years in baseball, Bosman has developed a distinct pitching philosophy and astute insights into the cat-and-mouse game between hitter and pitcher. In Dick Bosman on Pitching: Lessons from the Life of a Major League Ballplayer and Pitching Coach, author Ted Leavengood examines Bosman's life in baseball, from his winning the ERA title in the American League in 1969 and his no-hitter in 1974 to his current coaching position with the Tampa Bay Rays. For those wanting an inside look at the essentials of pitching, Leavengood includes insights and tips from Bosman throughout the book, compiled through hours of personal interviews. Bosman has worked for and with some of the best pitchers and coaches in major league baseball, and he not only shares stories from their time together but also the many things he learned from them about the game. Dick Bosman has found enormous success working with young ballplayers at all levels and fostered innovations-such as his signature slide step-that have impacted pitching in today's game. With personal anecdotes from Bosman, his teammates, and those he coached, Dick Bosman on Pitching will entertain and inform young pitchers as well as baseball fans of all generations.

Ted Leavengood is the managing editor of the baseball blog seamheads.com and hosted a podcast for the site for three years. He has written for Mid-Atlantic Sports Network (MASN), Elysian Fields Quarterly, and the Society of American Baseball Research (SABR). Leavengood is the author of The 2005 Washington Nationals: Major League Baseball Returns to the Capital (2006), Ted Williams and the 1969 Senators: The Last Winning Season (2009), and Clark Griffith: The Old Fox of Washington Baseball (2011). Dick Bosman was a professional pitcher with the Washington Senators from 1966 to 1971. He continued his career with the Texas Rangers, Cleveland Indians, and Oakland Athletics until 1976. Bosman was also the Major League pitching coach for the Chicago White Sox, Baltimore Orioles, and Texas Rangers. Since 2001 he has worked at various levels for the Tampa Bay Rays and currently serves them as a minor league pitching coordinator.

Dick Bosman on Pitching: Lessons from the Life of a Major League Ballplayer and Pitching Coach (Hardcover)