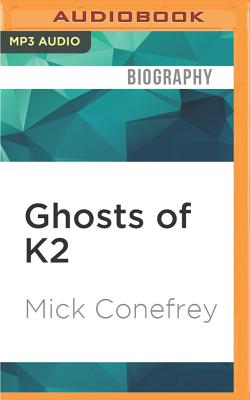 By Mick Conefrey, Barnaby Edwards (Read by)
$9.99
Email or call for price.

Mick Conefrey guides us through the early story of the legendary mountain and the extraordinary attempts that led up to its first ascent in 1954 - these are tales of riveting drama and unimaginable tragedy.

Starting with the ill-fated attempts of the drug-addicted occultist Aleister Crowley and the wealthy Italian Duke of Abruzzi, the book then focusses on the three dramatic expeditions of 1939, 1953 and 1954.

The thread joining them together is the American Charlie Houston - a brilliant but tortured expedition leader who dreamed of being the first man to make it all the way to the top.

Based on exclusive interviews with surviving team members and their families and access to diaries and letters that have been archived around the world, this is a narrative that evokes the true atmosphere of the 'Savage Mountain' and explores the complicated legacy of the first ascent.

Wrought with tension and populated by tragic heroes and eccentric dreamers, Ghosts of K2 is a masterpiece of mountaineering literature.