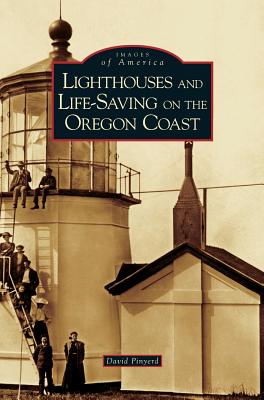 By David Pinyerd
$31.99
Usually Available/Ships in 5-7 Business Days
This book is non-returnable.

The Oregon Coast has been the site of shipwrecks even before Lewis and Clark's arrival in 1805. Even as the population grew, the federal government let the Oregon Coast go unguarded by lighthouses and lifesavers for decades. Economic and political pressures finally forced the government to build the first Oregon lighthouse in 1857 at the Umpqua River. The LifeSaving Service followed in 1878 with a station at the mouth of Coos Bay. Eventually, most of the harbor entrances and headlands were protected by both the Lighthouse Service and the LifeSaving Service, the precursor to today's Coast Guard. Lighthouses and Lifesaving on the Oregon Coast commemorates the true heroes who served to warn, protect, and rescue those who went to sea.

Lighthouses and Life-Saving on the Oregon Coast (Hardcover)