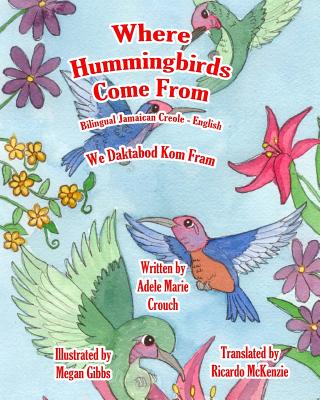 Fantasy, folklore, and magic fill the air as a young girl's grandmother relates a legend of Where Hummingbirds Come From. Grandmother explains the magic waters and the beauty of this tiny bird. Where Hummingbirds Come From may well become an all-time children's classic and a perfect book for the young reader. As well as a wonderful study guide for English as a second language students. Jamaican Creole (Patwa) Jamaica's motto, "Out of many one people" can be easily seen through its language. Jamaican Creole, known locally as Patwa (Patois), is an English-based Creole language in the Western Atlantic Creole family. Patwa has strong influences from languages of West and Central Africa, and small influences of Spanish and Portuguese. It developed during the 17th century and includes significant influences from various dialects of English, especially those of Scotland and Ireland, as well as dialects of West African languages such as Akan and Twi. Over 4 million people speak Jamaican Creole, most of whom live in Jamaica. There are also many speakers in parts of the USA, Canada, Brazil, Costa Rica, Panama, Nicaragua, Colombia and the UK. Nevertheless, the language is in danger because of the dated view that Patwa is a socially inferior language to English. In recent years, however, much has been done to educate Jamaicans and the Jamaican diaspora of the legitimacy and rich history of their language.