Where the Line Bleeds: A Novel (Paperback) 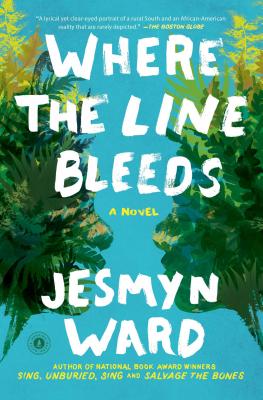 The first novel from National Book Award winner and author of Sing, Unburied, Sing Jesmyn Ward, a timeless Southern fable of brotherly love and familial conflict—“a lyrical yet clear-eyed portrait of a rural South and an African American reality that are rarely depicted” (The Boston Globe).

Where the Line Bleeds is Jesmyn Ward’s gorgeous first novel and the first of three novels set in Bois Sauvage—followed by Salvage the Bones and Sing, Unburied, Sing—comprising a loose trilogy about small town sourthern family life. Described as “starkly beautiful” (Publishers Weekly, starred review), “fearless” (Essence), and “emotionally honest” (The Dallas Morning News), it was a finalist for the Hurston/Wright Legacy Award and the Virginia Commonwealth University Cabell First Novelist Award.

Joshua and Christophe are twins, raised by a blind grandmother and a large extended family in rural Bois Sauvage, on Mississippi’s Gulf Coast. They’ve just finished high school and need to find jobs, but after Katrina, it’s not easy. Joshua gets work on the docks, but Christophe’s not so lucky and starts to sell drugs. Christophe’s downward spiral is accelerated first by crack, then by the reappearance of the twins’ parents: Cille, who left for a better job, and Sandman, a dangerous addict. Sandman taunts Christophe, eventually provoking a shocking confrontation that will ultimately damn or save both twins.

Where the Line Bleeds takes place over the course of a single, life-changing summer. It is a delicate and closely observed portrait of fraternal love and strife, of the relentless grind of poverty, of the toll of addiction on a family, and of the bonds that can sustain or torment us. Bois Sauvage, based on Ward’s own hometown, is a character in its own right, as stiflingly hot and as rich with history as it is bereft of opportunity. Ward’s “lushly descriptive prose…and her prodigious talent and fearless portrayal of a world too often overlooked” (Essence) make this novel an essential addition to her incredible body of work.

Jesmyn Ward received her MFA from the University of Michigan and has received the MacArthur Genius Grant, a Stegner Fellowship, a John and Renee Grisham Writers Residency, the Strauss Living Prize, and the 2022 Library of Congress Prize for American Fiction. She is the winner of two National Book Awards for Fiction for Sing, Unburied, Sing (2017) and Salvage the Bones (2011). She is also the author of the novel Where the Line Bleeds and the memoir Men We Reaped, which was a finalist for the National Book Critics Circle Award and won the Chicago Tribune Heartland Prize and the Media for a Just Society Award. She is currently an associate professor of creative writing at Tulane University and lives in Mississippi.

"A resonant novel for any reader."
—Booklist

"Lushly descriptive prose ... with stunning precision. Her prodigious talent and fearless portrayal of a world too often overlooked make her novel a powerful choice for our seventeenth Essence Book Club Recommended Read."
—Essence

"A lyrical yet clear-eyed portrait of a rural South and an African-American reality that are rarely depicted."
—Boston Globe

"I feel like I have read the debut work of the next Faulkner, or Capote, or O’Connor, a great Southern writer whom my children might some day read in their college classes."
—Oxford Eagle

"A richly textured tale ... like the best fiction, [it] creates its own world."
—New Orleans Times-Picayune

"Jesmyn Ward is undeniably one of the South’s most prominent and powerful voices, and although I have been making my way through her body of work (which includes two National Book Award–winning novels, a breathtaking and heart-wrenching memoir, and essays and interviews), I have yet to read her first novel, which placed her squarely in the Southern literary canon when it was published in 2008."
—Garden & Gun

"Ward’s beautiful language allows the location and characters to come alive ... will appeal to teens who can see themselves here or who are interested in discovering realities far from their own lives."
—School Library Journal

"Bursting with life—joyous, loving, frustrated and furious—Where the Line Bleeds marks the forceful debut of an exceptional new talent. Jesmyn Ward's vision is at once searingly honest and sweepingly empathic. Her vibrant portrait of a Mississippi Gulf Coast town is peopled by some of the most movingly, achingly human characters I've encountered in fiction in years."
—Peter Ho Davies, author of The Welsh Girl

"Jesmyn Ward's debut novel is eloquent in its description of young lives at risk; she's authoritative both when writing of the doomed and prospect of salvation. The lyric gifts displayed in Where The Line Bleeds are very impressive indeed, and the world evoked—the rural south, with its complex web of family devotion and betrayal—is vivid from first page to last. A major talent here."
—Nicholas Delbanco, author of Spring and Fall and The Count of Concord

"Where the Line Bleeds is a rich, subtle, lyrical novel by an important new writer. Jesmyn Ward writes with a miniaturist's attention to detail, with dazzling elegance and precision, but is unwaveringly compassionate in her exploration of character and place. There is suspense here, along with keen insight—the qualities that keep the pages turning. But there is also poetry, and mystery—the qualities that cause the reader to linger in wonder."
—Laura Kasischke, author of The Life Before Her Eyes