The Panic Virus: A True Story of Medicine, Science, and Fear (Hardcover) 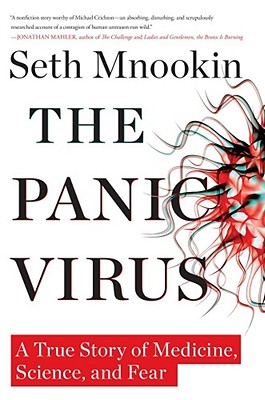 By Seth Mnookin
$26.99
Special Order - Subject to availability, call or email to order

WHO DECIDES WHICH FACTS ARE TRUE?

In 1998 Andrew Wakefield, a British gastroenterologist with a history of self-promotion, published a paper with a shocking allegation: the measles-mumps-rubella vaccine might cause autism. The media seized hold of the story and, in the process, helped to launch one of the most devastating health scares ever. In the years to come Wakefield would be revealed as a profiteer in league with class-action lawyers, and he would eventually lose his medical license. Meanwhile one study after another failed to find any link between childhood vaccines and autism.

Yet the myth that vaccines somehow cause developmental disorders lives on. Despite the lack of corroborating evidence, it has been popularized by media personalities such as Oprah Winfrey and Jenny McCarthy and legitimized by journalists who claim that they are just being fair to “both sides” of an issue about which there is little debate. Meanwhile millions of dollars have been diverted from potential breakthroughs in autism research, families have spent their savings on ineffective “miracle cures,” and declining vaccination rates have led to outbreaks of deadly illnesses like Hib, measles, and whooping cough. Most tragic of all is the increasing number of children dying from vaccine-preventable diseases.

In The Panic Virus Seth Mnookin draws on interviews with parents, public-health advocates, scientists, and anti-vaccine activists to tackle a fundamental question: How do we decide what the truth is? The fascinating answer helps explain everything from the persistence of conspiracy theories about 9/11 to the appeal of talk-show hosts who demand that President Obama “prove” he was born in America.

The Panic Virus is a riveting and sometimes heart-breaking medical detective story that explores the limits of rational thought. It is the ultimate cautionary tale for our time.

Seth Mnookin is a contributing editor at Vanity Fair and a former senior writer for Newsweek, where he covered media, politics, and popular culture. His writing has appeared in The Washington Post, New York magazine, and many other publications. He is the author of The Panic Virus: A True Story of Medicine, Science, and Fear; Feeding the Monster: How Money, Smarts, and Nerve Took a Team to the Top and Hard News: The Scandals at The New York Times and Their Meaning for American Media.  He lives in Brooklyn, New York.

“With rationality and science under siege these days, Seth Mnookin has produced a riveting and important chronicle of one life-and-death realm in which passionate, panicky belief has dangerously trumped reason—and put millions of children at risk.”
— Kurt Andersen, Host, "Studio 360"

“Seth Mnookin has given us a non-fiction story worthy of Michael Crichton—an absorbing, disturbing and scrupulously researched account of a contagion of human unreason run wild. This time the hysteria was over autism; the next panic virus could be even more dangerous.”
— Jonathan Mahler, author of The Challenge and Ladies and Gentlemen, the Bronx Is Burning

“An accomplished journalist, Seth Mnookin takes an objective look at both sides of the vaccine/autism controversy and lands squarely on the side of science. With humor and wit, The Panic Virus examines the often bizarre events that led some families to become distrustful of science and erroneously conclude that vaccines might cause autism. This book will leave you scratching your head in pure amazement that this issue could get so out of hand when the science is so clear.”
— Alison Singer, President, Autism Science Foundation

“In plain language, Seth Mnookin provides an excellent narrative and evaluation that helps clarify for readers how and why vaccine controversies have arisen over the years as well as sensible ways for readers to understand the science that supports vaccine usage. Vaccines are the most effective public health measure since clean water.”
— Judith Palfrey, MD, FAAP, professor of pediatrics, Harvard Medical School and author of Child Health in America

“Seth Mnookin understood there was something more to the cruelly misled and dangerously misleading vaccines-cause-autism movement than just an unhappy group of parents with a need to blame someone. He saw the connection between this deathless conspiracy theory and the proliferating irrationality of a society that has supersized its information diet while starving its capacity to think straight. For that reason alone—not to mention the deft, often charming characterizations woven into its skillful and fascinating narrative—this is an important, powerful, and bracing book.”
— Arthur Allen, author of Vaccine and Ripe

"There have been hundreds of recent outbreaks of ailments like whooping cough and measles that we thought would be eradicated by now—and might have been, if not for the anti-vaccine obfuscation. Bravo Seth Mnookin for digging for the truth and telling eloquent stories of what happens when lies, half-truths and self-interest collide with fear."
— Laurie Garrett, Pulitzer Prize-winning writer and author of Betrayal of Trust: The Collapse of Global Public Health

"Mr. Mnookin's passionate defense of vaccination may be just what the public needs, in equal parts because of what it says and because of who is saying it. . . . Parents who want to play it safe, but are not altogether sure how, should turn with relief to this reasoned, logical and comprehensive analysis of the facts."
— Abigail Zuger, M.D.