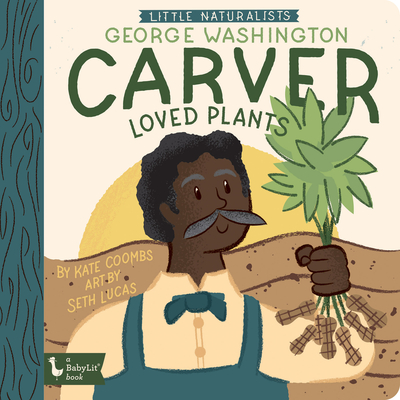 George Washington Carver was born the son of a slave near the end of the Civil War. When he was a baby, he and his mother were kidnapped by raiders. His mother was never found, but he was brought home. His mother's owners became his foster parents, raising him and his older brother. As he grew, George worked many jobs and tried many schools to learn everything he could, eventually earning bachelor's and master's degrees in agriculture at Iowa State Agricultural College. Then Booker T. Washington asked him to come teach at the Tuskegee Institute in Alabama, an all-black college. George taught and researched there for many years, also creating educational outreach programs to help poor farmers use the land more productively to both take care of the earth and feed people. He is best known for his work with peanuts.

Kate Coombs is an award-winning author of original fairy tales, poems, middle-grade fantasy novels, and picture books, including the critically acclaimed Water Sings Blue, which won the Lee Bennett Hopkins Poetry Award for 2012, and many books in the bestselling BabyLit series. She lives in Bountiful, Utah.Seth Lucas is an illustrator and designer with a BFA in graphic design. He is the cocreator of Ello There Outdoors selling prints and accessories supporting the National Parks and outdoors. He lives in Indianapolis, IN, with his wife and children.