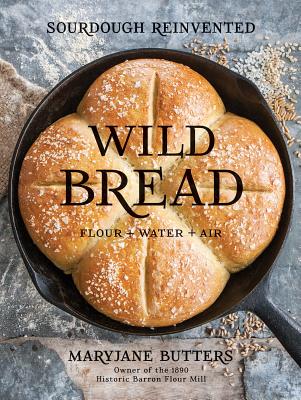 Is the world ready to rethink bread making?

Until now, sourdough was perceived as too much work and sour-tasting, artisan-style-only loaves. In Wild Bread, her quick and easy 1 minute 2x/day technique demonstrates the use of eight different types of flours for each bread featured--everything from gluten-free brown-rice flour to quinoa to common white to heirloom whole wheat--for a whopping 295 recipes and 475 photographs.

Using her step-by-step method, every style of bread imaginable, including gluten-free, will loft with wild abandon without the purchase of a single packet of not-so-healthy, store-bought yeast. In nutritionally superior wild-yeast bread, fermentation triggers the release of vital nutrients and breaks down carbohydrates. In MaryJane's world, there's no such thing as too much bread because once you convert to slow-rise wild-bread making, that bagel you've been thinking about is more like a vitamin pill than a source of "carb-loaded" guilt.

Lessons gleaned from MaryJane Butters' diverse pioneering background, from carpenter to dairy owner to former wilderness ranger turned organic farmer, led her eventually to stewardship of the 4-story, historic Barron Flour Mill. It was only natural that her years spent living on remote Forest Service fire-watch towers with only a living, breathing sourdough "mother" for companionship would lead her to write a pioneering wild-yeast bread book. She is the author of eight books; editor of MaryJanesFarm magazine, now in its 18th year of publication; and lives on an organic farm in Idaho. Two of her grown children and their spouses are employed full-time at her farm and she is "Nanny" to half a dozen grandchildren.