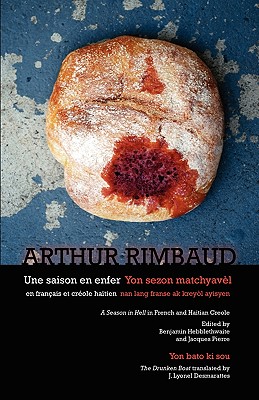 This book offers Arthur Rimbaud's tumultuous prose poem of 1873, 'Une saison en enfer', 'A Season in Hell, ' in the French original with the Haitian Creole translation, 'Yon sezon matchyav l, ' on facing pages. This powerful literary text transposes the creative and violent love affair of the younger Arthur Rimbaud with the older and married Paul Verlaine into whirling prose poetry that is piercing, hallucinatory and mysterious. Written at the age of 19 while recovering from a gun-shot wound inflicted by the jealous Verlaine, the work reveals the traumas of his personal life and it exposes the contradictions, genius and madness of France, Europe and colonialism in the late nineteenth century. This volume also provides J. Lyonel Desmarattes' adaptation of Rimbaud's beloved poem, 'Le bateau ivre', 'The Drunken Boat, ' as 'Bato sou a, ' which, at the age of 17, he sent to Verlaine in a letter of introduction. Rimbaud's writing embodies the power of creativity as the ultimate response to pain, alienation and confusion.

This book provides the French original and the Haitian Creole translation on facing pages in order to give readers the means to compare the languages and to see how the cultural and idiomatic expressions in the source text were rendered in the Haitian Creole target text.

Benjamin Hebblethwaite is Assistant Professor in Haitian Creole and Haitian Studies at the University of Florida.

J. Lyonel Desmarattes is the translator of several French and English literary works into Haitian Creole and a Journalist in the Creole Section of the Voice of America.

Fabrice Policard worked for Classic Editions while enrolled as an undergraduate at the University of Florida.