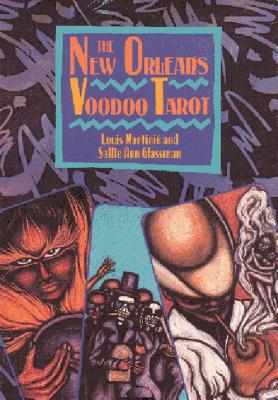 The first tarot to celebrate an African-American culture, this book and 79-card deck capture both the spirit and the imagery of Voodoo's African, West Indian, and Catholic influences. Ancient and earth-honoring, Voodoo's practices take on different forms specific to time and place, but its essence remains focused on the loa--the potent spiritual forces of Voodoo that are manifested directly through human beings and their actions.

The authors draw strong parallels between the Waite and Thoth Tarots, the Kabalistic Tree of Life, and the Voodoo tradition as it is practiced in New Orleans. Just as the major and minor arcana of the Tarot represent the archetypes of the human psyche and the natural forces of our world, so do the loa of Voodoo embody the primal energies of the universe. With a variety of spreads and readings, the authors show how the Tarot can be an idea channel through which the loa exercise their powers to teach, advise, and initiate the serious student into their mysteries.

Louis Martinie is a teacher and musician, who has served as editor of Black Moon Publishing for the past fifteen years. He is an accomplished drummer of both sacred and secular music, and is the author of Waters of Return and The Aeonic Flow of Voodoo.

Award-winning artist Sallie Ann Glassman was educated at Columbia University and the New Orleans Art Institute. She is the designer of the Enochian Tarot, and is a published book cover illustrator.

"The first complete tarot to celebrate the magical roots and rites of an African-American culture."
— New Age Retailer

"New Orleans Voodoo Tarot is a stunning achievement. Both a graphic tour de force and a fascinating insight into the mysterious, yet compelling, mythos that is called Voodoo."
— L. Simon Jennings, Alternatives

"The New Orleans Voodoo Tarot is arguably the first truly American tarot as it is a natural extension of the New World spirituality it illustrates. Glassman's art brilliantly evokes the colorful and vibrant energy of the Voodoo tradition, and Glassman's and Martinie's companion text is clear and straightforward."
— Hymenaeus Beta X, Frater Superior, O.T.O.

"I checked out the New Orleans Voodoo Tarot. Wow. The authors created their book with great care and it is thoroughly enjoyable. It is well-researched, well written and educational. Voodoo and all of its cousin religions were unfolded to me as never before."
— Elaine Riccardelli, A Sign of the Times Aquarius

"This book and tarot deck are both incredibly beautiful and give off the general awe surrounding the voodoo tradition. This set is a must for anyone interested in Voodoo or anyone who loves to use and collect unique tarot decks."
— Morgaine, The Pagan Review, Oct 2007

"This is the only Tarot book I've ever read, and I've read a lot of them, that truly engaged and engrossed me. . . . The artwork is remarkable and often striking, communicating complex and ancient concepts with bold, simple designs with images from modern day New Orleans."
— Elizabeth Bisette, Mythology Editor, BellaOnline, Jan 2009