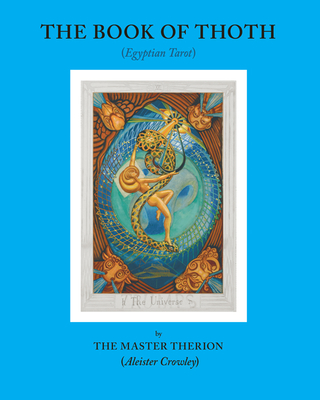 By Aleister Crowley
$60.00
Special Order - Subject to availability, call or email to order

Aleister Crowley's The Book of Thoth endures as one of the most definitive volumes on the tarot ever written. This classic text describes the philosophy and use of Aleister Crowley's Thoth Tarot, a deck designed by Crowley and painted by Lady Frieda Harris. The Thoth Tarot has become one of the bestselling tarot decks in the world. It is also one of the most original interpretations of the tarot, incorporating astrological, numerological, Egyptian, and Qabalistic symbolism. While there are many other useful guides to this famous tarot deck, there are no others that explain the deck in its designer's own words.

This new facsimile edition of The Book of Thoth is a faithful reproduction of the Samuel Weiser Inc. 1969 edition, which in turn was a facsimile of the original O.T.O. edition printed in 1944. The text is digitally restored, printed on a heavy, coated stock, and features revised color plates and black and white illustrations of the Thoth Tarot based on new photography of the original art, courtesy of the O.T.O. and The Warburg Institute. The book text block is smyth sewn, with a rounded back, and headbands. Printed endpaper reproduces the Egyptian motif from the board covers of the 1944 edition. The cover is quality cloth over boards with gold stamping on the spine, and is wrapped with a jacket which again features updated art while matching the original design. Weiser Books takes pride in the release of this new hardcover reprint on the event of our 60th anniversary in publishing.

"The Book of Thoth is an indispensable companion to the deck and the most authoritative and reliable guide to the Tarot in the New Aeon." --Hymenaeus Beta, Frater Superior, O.T.O.

Aleister Crowley (1875-1947) was the most widely read author in 20th-century occultism. He single-handedly redefined magic as a field of inquiry and endeavor through his books and the order that he led--the A.A. and the O.T.O. He is the author several books including The Book of the Law, 777 &amp; Other Qabalistic Writings, and The Book of Thoth.

"If any book in the world deserves to be enshrined in hardcover immortality it is Aleister Crowley's magnum opus and magical time-capsule, The Book of Thoth. The Weiser facsimile edition is breathtakingly magnificent." --Lon Milo DuQuette, author of Understanding Aleister Crowley's Thoth Tarot
— Reviews

"This edition of The Book of Thoth, Crowley's masterpiece on the Tarot, is as well-constructed and weighty as its subject matter, with full-color images as vivid as the original. It is an exceptional edition of a controversial and critical work in the history of modern Tarot that eloquently unravels the depths of this esoteric subject." --Colin Campbell, author of Of the Arte Goetia, The Magic Seal of Dr. John Dee, and A Concordance to the Holy Books of Thelema
— Reviews

"Aleister Crowley published his masterpiece on the Tarot, The Book of Thoth, in 1944. It was produced in an exquisitely printed, limited, numbered, and signed edition of 200 copies that has been a treasured collector's edition since. Its eight color plates of several cards were hand-pasted in.

In 1969, Samuel Weiser, Inc. published a well-executed second edition reprint of the 1944 book. A quality hardcover with a lovely book jacket and full-color illustrations as per Crowley's choices, it was reprinted several times until replaced by the ubiquitous trade paperback in the early 1970s, in print ever since.

This year, in celebration of the 60th Anniversary of Weiser Books has done it again. They have reissued a brand new high quality hardcover that is a true third edition. First, they worked with O.T.O. on replacing the original artwork (color and black-and-white) with color-corrected photos and scans of the original paintings in the Warburg Institute painted by Frieda Lady Harris. They also reproduced the beloved 1969 jacket, with more generous inside flaps and better paper. As a real treat, the book includes high quality color endpapers of the Egyptian design that was printed on the cover of Crowley's 1944 edition. The text paper used in the book is a quality coated art paper which highlights the color plates as well as the halftones of the entire deck.

No words are needed to describe the importance of this book in Crowley's literary corpus. Weiser Books has done it full justice. And for $60.00, you can't go wrong." --James Wasserman, author of the original Thoth Tarot pamphlet insert, "Instructions for Aleister Crowley's Thoth Tarot Deck," and Aleister Crowley and the Practice of the Magical Diary