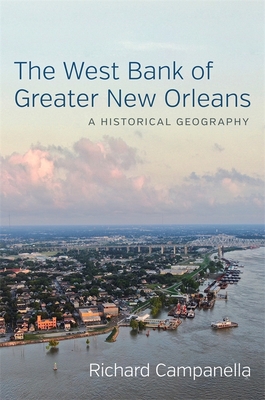 The West Bank has been a vital part of greater New Orleans since the city's inception, serving as its breadbasket, foundry, shipbuilder, railroad terminal, train manufacturer, and even livestock hub. At one time it was the Gulf South's St. Louis, boasting a diversified industrial sector as well as a riverine, mercantilist, and agricultural economy. Today the mostly suburban West Bank is proud but not pretentious, pleasant if not prominent, and a distinct, affordable alternative to the more famous neighborhoods of the East Bank.

Richard Campanella is the first to examine the West Bank holistically, as a legitimate subregion with its own story to tell. No other part of greater New Orleans has more diverse yet deeply rooted populations: folks who speak in local accents, who exhibit longstanding cultural traits, and, in some cases, who maintain family ownership of lands held since antebellum times--even as immigrants settle here in growing numbers. Campanella demonstrates that West Bankers have had great agency in their own place--making, and he challenges the notion that their story is subsidiary to a more important narrative across the river. The West Bank of Greater New Orleans is not a traditional history, nor a cultural history, but rather a historical geography, a spatial explanation of how the West Bank's landscape formed: its terrain, environment, land use, jurisdictions, waterways, industries, infrastructure, neighborhoods, and settlement patterns, past and present. The book explores the drivers, conditions, and power structures behind those landscape transformations, using custom maps, aerial images, photographic montages, and a detailed historical timeline to help tell that complex geographical story. As Campanella shows, there is no "greater New Orleans" without its cross--river component. The West Bank is an essential part of this remarkable metropolis.