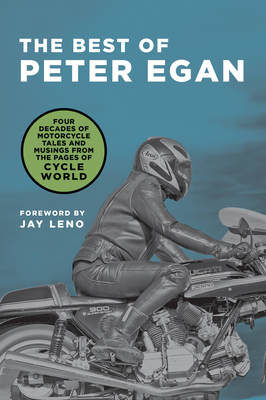 The Best of Peter Egan offers a “greatest hits” collection of Egan's motorcycle musings from the past four decades, delivered in his signature, wise but amusing, style. Peter Egan's writing invites you to pull up a chair, pour a little scotch, and relax while he shares with you his tales from the road, his motorcycling philosophy, and his keen observations about the two-wheeled life.

For some forty years, Peter Egan’s columns and feature articles have been among Cycle World's most anticipated monthly content. Egan's legions of fans know they will gain a fresh perspective on motorcycling from each of his articles.

Drawings from motoring artist Hector Cademartori beautifully illustrate Egan’s musings, and a foreword by super-enthusiast Jay Leno introduces the book. This is an unforgettable collection from a master writer whose simple adventures of two-wheeled life remind us why we love to ride.

Peter Egan is one of the most readable writers in the motorcycle enthusiast world. His work first appeared in Cycle World magazine in 1977, and he has been a regular fixture there ever since. Peter lives near Madison, Wisconsin.

The Best of Peter Egan: Four Decades of Motorcycle Tales and Musings from the Pages of Cycle World (Hardcover)