Violet and the Crumbs: A Gluten-Free Adventure (Hardcover) 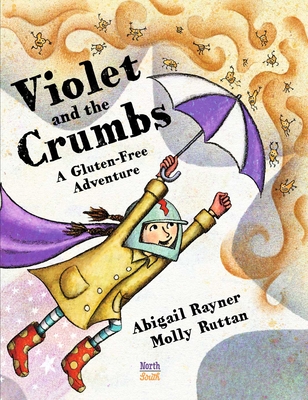 Success has never tasted so good!

Anyone who feeds other people would be well served by this tale. –Kirkus Reviews


The dynamic duo of I Am a Thief by Abigail Rayner (author) and Molly Ruttan (illustrator) have created a new picture book sure to spark conversations about this timely issue.

Violet used to love birthday parties, but now that she has celiac disease, she’s not allowed to eat pizza, cake, or anything else with gluten. Violet feels alone until she discovers that some animals have dietary restrictions as well. While standing up for her animal friends, she realizes she can do the same for herself. And when it’s time to celebrate Violet’s birthday, there isn’t a single gluten-containing crumb in sight!

Filled with pluck and humor, this informative story provides a great opportunity to discuss this increasingly common condition with children who have celiac disease and gluten-intolerance as well as those who know people who have it and are seeking to learn more about it.

This book has been approved by the Celiac Disease Foundation.

Praise for I Am a Thief

“...this book will resonate, and, provides an avenue for dialogue.” School Library Journal

Abigail Rayner grew up mostly in England with a couple of years in Greece thrown in. She moved to New York City in her twenties, where she worked as a reporter for British newspapers. Her books, The Backup Bunny (2018) and I Am a Thief (2019) called “Hilarious and sweet” by Kirkus Reviews (starred review), have delighted children. This is her third picture book for NorthSouth Books. She lives in New Jersey, with her husband, two kids, two cats, and lots of tasty gluten-free snacks.

Molly Ruttan is from Hastings-on-Hudson, New York, where she and her twin sister grew up drawing and creating plush toys, board games, and, of course, books! Molly attended Cooper Union School of Art in New York City. She graduated with a BFA in graphic design. Her first picture book for NorthSouth, I Am a Thief (2019) called “Hilarious and sweet” by Kirkus Reviews (starred review), is a delight. She is married to Gabriel Moffat, her childhood sweetheart and a fellow musician. They have three daughters, three dogs, one cat, one rabbit, a garden, and some fish!

Though a medical diagnosis makes social situations tough for a young girl, she finds a way to cope. After Violet learns she has celiac disease, birthday parties and school lunches are a drag. Her peers try to be understanding about how she can’t partake in cakes and cookies, but what they don’t understand is that gluten is everywhere—even the crumbs. “Safe” foods like fruit become off-limits as soon as someone handles them with fingers that previously touched gluten-filled snacks. Her protective measures leave her isolated at school, but Violet gradually becomes a bit of a superhero when she advocates for animals like ducks, who are often fed foods not suited to their digestive systems. But she still has to figure out a way to fit in with her classmates so she can make some friends. The protagonist is White, and the supporting cast is diverse in skin tone and ability. Accompanied by artwork rendered in a muted palette, the text balances Violet’s narrative with more scientific explanation without feeling preachy or didactic. Anyone who feeds other people would be well served by this tale. An illustrated glossary of gluten-full and gluten-free grains makes up the endpapers. Kids with celiac will feel seen.
— Kirkus Reviews

Rayner’s instructional picture book informs children about gluten while relating the tale of a girl who has celiac disease. Because any gluten will make Violet ill, even tiny crumbs, she must be vigilant in avoiding it and feels uncomfortable attending events where food is served. She doesn’t want to make a big deal of her disease, but it sets her apart from the other kids, and they don’t understand how serious it is. Violet figures out that by preparing and sharing some foods that taste good and are safe for her to eat, she can educate others about celiac disease and feel more secure in attending parties and other gatherings. Intriguing artwork deftly illustrates Violet's dilemma. The book begins with “Grains That Contain Gluten,” an illustrated list of the grains and some products in which they are included. More information can be found at the conclusion of Violet’s story in an “About Celiac Disease” section and a listing of grains, starches, and flours that are safe for people who share her illness.
— Boklist