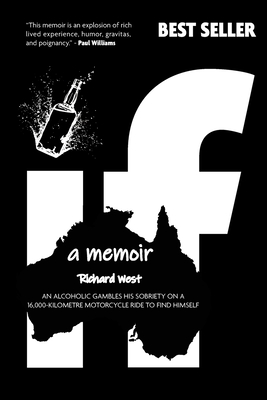 By Richard West
$14.99
Usually Available/Ships in 5-7 Business Days
This book is non-returnable.

A man hell-bent on challenging his own sobriety

Recovering alcoholic Richard West has never exorcised the ghosts of his worst tragedy. It destroyed his life and left him broken. With guilt eating him alive, he buys a motorcycle and escapes on an impulsive journey into the Australian Outback.As the former corporate cop attempts to circumnavigate one of the harshest continents in the world in just a few months, he sees haunting visions that both torture and guide him. But when he meets a woman in a yellow drop-top Bug, she threatens his sobriety. With each temptation, the bottle of Johnnie Walker in his saddlebag whispers his name.

Eventually, he has to make a choice. One that will change everything.

If is an extraordinary memoir about riding to redemption. If you like flawed heroes, road novels, or have ever battled to overcome your own demons, then Richard West's memoir will touch your heart.

Get If today and join this gut-wrenching fight to survive

"This memoir is an explosion of rich lived experience, humour, gravitas and poignancy. If tells the story of an outback contemporary Australia not seen by many and documents the struggle of a man coming to terms with himself, his past and his future." - Paul Williams (Internationally acclaimed author of Soldier Blue and winner of the South African book of the year).

If: a Memoir - An alcoholic gambles his sobriety on a 16,000-kilometre motorcycle ride to find himself. (Paperback)