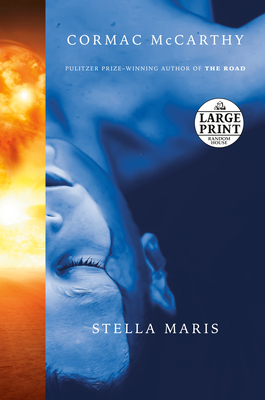 The best-selling, Pulitzer Prize–winning author of The Road returns with the second volume of The Passenger series: Stella Maris is an intimate portrait of grief and longing, as a young woman in a psychiatric facility seeks to understand her own existence.

1972, BLACK RIVER FALLS, WISCONSIN: Alicia Western, twenty years old, with forty thousand dollars in a plastic bag, admits herself to the hospital. A doctoral candidate in mathematics at the University of Chicago, Alicia has been diagnosed with paranoid schizophrenia, and she does not want to talk about her brother, Bobby. Instead, she contemplates the nature of madness, the human insistence on one common experience of the world; she recalls a childhood where, by the age of seven, her own grandmother feared for her; she surveys the intersection of physics and philosophy; and she introduces her cohorts, her chimeras, the hallucinations that only she can see. All the while, she grieves for Bobby, not quite dead, not quite hers. Told entirely through the transcripts of Alicia’s psychiatric sessions, Stella Maris is a searching, rigorous, intellectually challenging coda to The Passenger, a philosophical inquiry that questions our notions of God, truth, and existence.

The novels of the American writer, Cormac McCarthy, have received a number of literary awards, including the Pulitzer Prize, the National Book Award, and the National Book Critics Circle Award. His works adapted to film include All the Pretty Horses, The Road, and No Country for Old Men—the latter film receiving four Academy Awards, including the award for Best Picture.

“[Stella Maris] is a Tom Stoppardesque bull session. Does it work? Uh-huh. Does it work more fully if you’ve already read The Passenger? Absolutely…Stella Maris is…[an] elegiac novel. It’s best read while you are still buzzing from the previous book. Its themes are dark ones, and yet it brings you home, like the piano coda at the end of “Layla.” No one in the real world talks the way Alicia does — she’s seeing with her third eye, flexing her middle finger at the world, rocking her family’s thundersome legacy — but they might if they could. She lays down…cataclysmic one-liners…All this is cut with humor…Alicia toys with her shrink. It’s as if she’s breathing on a car window and drawing flowers and skulls in the condensation…The most moving moments in Stella Maris braid [Alicia’s] feelings for her brother, which go through her like a spear, with a sense of intellectual futility. Reading Stella Maris after The Passenger is like trying to hang onto a dream you’ve been having. It’s an uncanny, unsettling dream, tuned into the static of the universe.”
—Dwight Garner, The New York Times

"[Stella Maris and The Passenger] illuminate each other, and yet the relation between them is no easier to define than one between actual breathing people....Stella Maris is...rigorously structured...Electrifying...McCarthy’s language has all the richness of the King James Bible, its cadences slow and forever beautiful and forever at odds with the world it describes....I felt like crying myself as I approached the end of Stella Maris, the end of this dark enthralling pair."
—Michael Gorra, The New York Review of Books

“With the publication of The Passenger and its companion novel Stella Maris, McCarthy seems to be done mining the myth of America. Instead, he ponders what it means to exist, and what our history tells us about our future… He digs into the big ideas of the universe, like human existence and what it means, as well as what our history and memory mean. He’s searching for something different… Where other writers venture into the mind and soul, McCarthy has leapt past that to ask what a soul is—and if it even exists…. McCarthy is no longer searching in the dirt trail across the West and saying, ‘This is it. This is our human nature.’ In The Passenger and Stella Maris, he’s trying to see the God that made the man who wrote those words.”
—Kevin Koczwara, Esquire

“Sometimes I think the reason literary criticism got obsessed with evaluating prose as ‘sentences’ over the past few decades is simply that McCarthy’s are so good. They rattle out at you like little bullets, mean and punchy and precise… Taken together, [The Passenger and Stella Maris] offer an intellectual experience that’s not quite like anything else out there, laced with the eerie beauty that only Cormac McCarthy can offer.”
—Constance Grady, Vox

"As a window into a great writer’s intellectual preoccupations, Stella Maris is invaluable... Stella Maris is... a neat mirror of The Passenger: It fills in gaps in Bobby’s story and shows us the siblings’ shared history from Alicia’s point of view. In The Passenger, Alicia is a cipher—all the more intriguing for being inaccessible to the reader. In Stella Maris, McCarthy lifts the veil on his mysterious creation."
—Maggie Doherty, The New Republic

“[McCarthy] reigns as a titan of American lit—an undisputed heir to Melville and Faulkner, the subject of infinite grad-school theses, and a hard-nosed dispenser of what Saul Bellow called ‘life-giving and death-dealing’ sentences... It's the humid, fevered, magniloquent, Bible-cadenced, comma-starved, word-drunk prose of what some fans consider his masterwork, Suttree... There's a lot here. It might make your head spin... What it all adds up to—perhaps surprisingly—is a doomed and unsettling love story, a Platonic tragedy.... Electric and thunderous… An astonishing pair of novels… Taken together, The Passenger and Stella Maris are an intellectually breathtaking achievement.”
–Jonathan Miles, Garden & Gun

“At 89, [McCarthy is] still riffing, like a jazz virtuoso, on the American Nightmare, Faulkner’s mythmaking, and the cadences of Joyce. McCarthy’s flame burns bright and clear in two new works…The Passenger, wondrous in its architecture, and a companion piece, Stella Maris, a minimalist, edgy novella…McCarthy toggles between books and across decades, sketching the contours of a love that dare not say its name. McCarthy’s art is transcendent even as it takes no prisoners, an achievement akin only to the oeuvres of his greatest peers, Toni Morrison and Philip Roth. He will endure.”
—Oprah Daily

“Like [Bob] Dylan, McCarthy fashions the country as a cast-iron, biblical land where grand themes play out in vast landscapes around lonely, small people. You can practically hear the rusty gate swaying in the wind, everything made of leather, mud, or simmering flesh. Most of us imagine life as a high-wire act with oneself as the acrobat, but McCarthy acknowledges it as a bridge, an ordinary path of extraordinary consequence with a beginning, an end, and an edge most men don’t ever tempt…The language in The Passenger and Stella Maris is compelling and soulful, even when the voice sounds sharp. Amid…talk of mathematics and wickedness and hideous ruination, there is poetry and the rhythm of song. Sheddan’s lines alone are worth the price of admission, such as when he says humans are ‘ten percent biology and ninety percent nightrumor,’ and that ‘every remedy for loneliness only postpones it.’”
—Nathan King, Air Mail

"A deeply prodding and inwardly focused novel about a young woman who admits herself to a psychiatric hospital in 1972. Whereas The Passenger echoes some of the raw adrenaline-spiking aspects of McCarthy’s past works, Stella Maris is a largely philosophical endeavor written entirely in dialogue. The result is a more-than-welcome addition to this prolific author’s bibliography."
—Chicago Review of Books

“The Passenger and Stella Maris tackle dazzlingly fresh ground…McCarthy’s daring has not dimmed since The Road, and The Passenger and Stella Maris pull no punches as they explore the craggiest regions of human consciousness through two of McCarthy’s most vividly drawn characters… McCarthy’s writing retains the tangible gristle of a field guide, full of the organic solidity and exacting diction that have helped solidify his reputation… Read together, The Passenger and Stella Maris are a fascinating diptych, bringing light and depth to each other. The mysteries and coincidences are legion, and mirrored moments are plentiful...McCarthy’s writing pursues a sublime and majestic undercurrent weaving through the dark waves of chaos...he results are staggering.”
—Seth L. Riley, The Millions

“A…beautifully rendered meditation on humanity’s relationship to nature… McCarthy, perhaps the most lyrical poet of slaughter since Homer, is at his most biblical and elegiac describing the horrors of Hiroshima and Nagasaki… The Passenger and Stella Maris together form a profound addition to the legacy of a true literary savant.”
—Ed Tarkington, Chapter 16

“[McCarthy] rockets readers into the black hole at the hub of his galactic imagination, an event horizon so rich and dense we can only marvel as we fall through its warped fabric….Like Moses, McCarthy seeks a land of milk and honey beyond the rim of the universe but spies only oblivion (and perhaps the ghostly glow of math)… Despite the darkness ahead, The Passenger and Stella Maris crown a magnificent career that will guide us forward, for as long as the lights stay on.”
—Hamilton Cain, Star Tribune

"The relationship between [Stella Maris and The Passenger], and between the two siblings, is analogous to the concept of quantum entanglement: God and physics, faith and reason are all connected, but it’ll blow your mind if you try to understand how....McCarthy’s superpowers [are] his perfect ear for the southern American voice, his exceptional ability to reveal character through speech, his masterful writing about nature. And his humor."
—Spectator World

"McCarthy delivers some of his best work in scenes that you both expect...and don’t....The story McCarthy has told so far leaves the reader pondering some of life’s deepest questions, and affirms that McCarthy’s command of his writing — and our attention — is as good as ever."
—Geoff Smith, The Berkshire Eagle

"A companion to McCarthy’s The Passenger that both supplements and subverts it… Enigmatic… A grand puzzle, and grandly written at that, about shattered psyches and illicit dreams."
—Kirkus Review, Starred Review