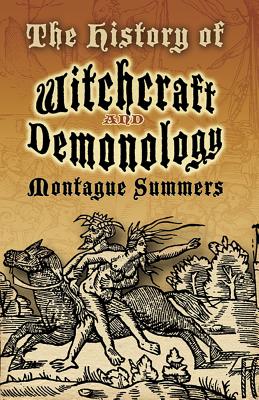 Vividly detailed and highly readable, this classic history of witchcraft and demonology provides a thorough exploration of sorcery, Satanism, and every variety of the black arts. Reflecting popular folklore and theological opinions of the late medieval and early Renaissance periods, this survey of necromancy traces witchcraft from ancient times to the twentieth century, describing the link between heresy and the occult. Threaded with dramatic accounts of witch trials and devil's pacts, this time-tested reference offers a compelling look at The Worship of the Witch, Demons and Familiars, the Sabbat, and Diabolic Possession and Modern Spiritism. It also offers fascinating insight into the role of the Witch in Dramatic Literature.
A prolific occult historian, Montague Summers wrote numerous books, and he edited and translated such important early demonology and witchcraft texts as the Malleus Maleficarum. An intriguing perspective on the development of the black arts and their heretical interpretations by society, church, and state, The History of Witchcraft and Demonology will capture the attention of the general reader as well as the occult enthusiast. Eight meticulously reproduced illustrations from the original publication are included in this unabridged edition.

Montague Summers (1880-1948) wrote numerous books on witches, vampires, and werewolves from a true believer's point of view. He also edited and translated several important early texts on demonology and witchcraft.

The History of Witchcraft and Demonology (Dover Occult) (Paperback)