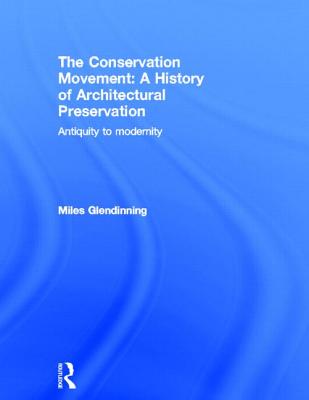 Winner of the 2016 Antoinette Forrester Downing Award presented by the Society of Architectural Historians.

In many cities across the world, particularly in Europe, old buildings form a prominent part of the built environment, and we often take it for granted that their contribution is intrinsically positive. How has that widely-shared belief come about, and is its continued general acceptance inevitable?

Certainly, ancient structures have long been treated with care and reverence in many societies, including classical Rome and Greece. But only in modern Europe and America, in the last two centuries, has this care been elaborated and energised into a forceful, dynamic ideology: a 'Conservation Movement', infused with a sense of historical destiny and loss, that paradoxically shared many of the characteristics of Enlightenment modernity. The close inter-relationship between conservation and modern civilisation was most dramatically heightened in periods of war or social upheaval, beginning with the French Revolution, and rising to a tragic climax in the 20th-century age of totalitarian extremism; more recently the troubled relationship of 'heritage' and global commercialism has become dominant.

Miles Glendinning's new book authoritatively presents, for the first time, the entire history of this architectural Conservation Movement, and traces its dramatic fluctuations in ideas and popularity, ending by questioning whether its recent international ascendancy can last indefinitely.

Miles Glendinning is Professor of Architectural Conservation at the University of Edinburgh and Director of the Scottish Centre for Conservation Studies. He has published extensively on modernist and contemporary architecture and housing: his books include the award-winning Tower Block (with Stefan Muthesius), Modern Architect, on the life and times of Sir Robert Matthew, and Architecture's Evil Empire, a polemical evaluation of contemporary 'iconic modernism'. His current research projects include an in-depth investigation of mass housing in Hong Kong and Singapore.

The Conservation Movement: A History of Architectural Preservation: Antiquity to Modernity (Hardcover)