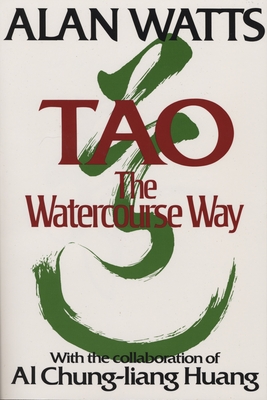 By Alan Watts
$17.00
Special Order - Subject to availability, call or email to order

Drawing on ancient and modern sources, "a lucid discussion of Taoism and the Chinese language [that's] profound, reflective, and enlightening." —Boston Globe

According to Deepak Chopra, "Watts was a spiritual polymatch, the first and possibly greatest."  Watts treats the Chinese philosophy of Tao in much the same way as he did Zen Buddhism in his classic The Way of Zen. Critics agree that this last work stands as a perfect monument to the life and literature of Alan Watts.

"Perhaps the foremost interpreter of Eastern disciplines for the contemporary West, . . . Watts begins with scholarship and intellect and proceeds with art and eloquence to the frontiers of the spirit."—Los Angeles Times

ALAN W. WATTS, who held both a master’s degree in theology and a doctorate of divinity, is best remembered as an interpreter of Zen Buddhism in particular, and of Indian and Chinese philosophy in general. Standing apart, however, from sectarian membership, he has earned the reputation of being one of the most original and “unrutted” philosophers of the twentieth century. Watts was the author of some twenty books on the philosophy and psychology of religion that have been published in many languages throughout the world, including the bestselling The Way of Zen. An avid lecturer, Watts appeared regularly on the radio and hosted the popular television series, Eastern Wisdom and Modern Life, in the 1960s. He died in 1973.

"A gem to remember Watts by ... There is a flamboyant and fascinating display of learning and complex indications of a personality that seems to have resisted inner pacification."
—Kirkus Reviews

"Perhaps the foremost interpreter of Eastern disciplines for the contemporary West, Alan Watts had the rare gift of 'writing beautifully the unwritable' ... Watts begins with scholarship and intellect and proceeds with art and eloquence to the frontiers of the spirit ... This is a profound and worthy work, left by a teacher to echo and re-echo."
—Los Angeles Times

"A remarkable book because of Alan Watts's talent for communicating Eastern ways of thought ... not only the last of his works, but the best ... This book is a 'must.'"
—Shambhala Review

"Watts's last book is in the category of his finest work, a lucid discussion of Taoism and the Chinese language ... profound, reflective, and enlightening. Moreover, the text supplies a sense of his ebullient spirit behind the revelation of Tao."
—Boston Globe