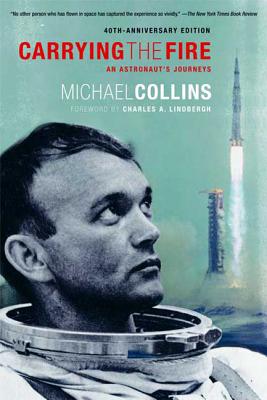 By Michael Collins, Charles A. Lindbergh (Foreword by)
Email or call for price
Out of Print

The years that have passed since Neil Armstrong, Buzz Aldrin, and Michael Collins piloted the Apollo 11 spacecraft to the moon in July 1969 have done nothing to alter the fundamental wonder of the event: man reaching the moon remains one of the great events--technical and spiritual--of our lifetime.

In Carrying the Fire, Michael Collins conveys, in a very personal way, the drama, beauty, and humor of that adventure. He also traces his development from his first flight experiences in the air force, through his days as a test pilot, to his Apollo 11 space walk, presenting an evocative picture of the joys of flight as well as a new perspective on time, light, and movement from someone who has seen the fragile Earth from the other side of the moon.

Astronaut Michael Collins is one of 24 people who have flown to the moon. He flew in both the Gemini 10 space mission in 1966 and Apollo 11 lunar mission in 1969. He currently lives in South Florida.

“Collins tells what his space journeys meant to him as a human being [and] discusses the role of man amid the multitudinous mechanical marvels . . . Profoundly affecting.” —The New Yorker

“Michael Collins can write . . . No other person who has flown in space has captured the experience so vividly.” —Henry S.F. Cooper, Jr., The New York Times Book Review