The Apostles: A Novel (Paperback) 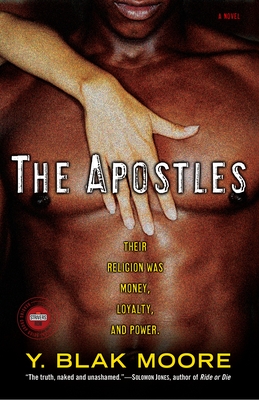 The Apostles run Chicago’s streets. Their leader, “Solemn Shawn” Terson, is the most revered–and feared–man in town. Because of his past exploits, the Apostles have a loyalty among its members that has reached mythic proportions.

When Insane Wayne, a former member of the rival gang, the Governors, comes groveling for admission to the coveted Apostles, he’s quickly turned down. His reaction is violent: He shoots a Governor and plants evidence that lays the murder rap on the Apostles, setting off a bloody series of retaliations.

Solemn Shawn is ready to give up the gang world. His pregnant girlfriend wants another way of life and the cops are hot on his tail; he knows the time has come to step aside. But he must fight one more street war before handing over the reins of his empire. The head of the Governors has a score to settle with Shawn that dates back to their prison days–and Shawn and the Apostles must fight or flee as the streets around them erupt in violence. . . .

Y. Blak Moore is a poet, social worker, and former gang member who grew up in the Chicago housing projects. He is also the author of Triple Take. Moore has three children and lives in Chicago.

"Every nail-biting, adrenaline-laced, heart-racing page of The Apostles kept me on the edge of my seat." --Nikki Turner, author of The Hustler's Wife

"Y. Blak Moore's The Apostles is the truth, naked and unashamed." -Solomon Jones, author of Ride Or Die