Legendary Creatures: Mythical Beasts and Spirits from Around the World (Hardcover) 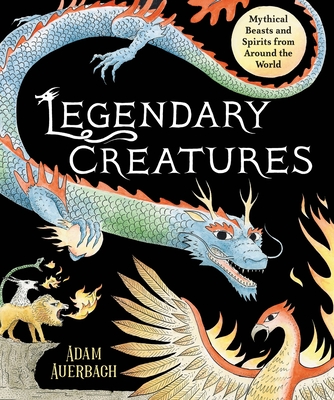 From the vicious three-headed Chimera of ancient Greece to the peaceful Navagunjara of India— a creature made from parts from nine different animals—to the awe-inspiring dragons of Europe and East Asia, this exciting introduction to mythological creatures celebrates the wondrous beings featured in stories from all over the world. Including a vast array of fierce monsters, powerful spirits, ancient gods, and helpful beasts, Legendary Creatures is the perfect primer to engage young readers interested in the fascinating world of mythology.

Adam Auerbach is the creator of The Three Vikings, Monkey Brother, and Edda: A Little Valkyrie's First Day of School, which was named an Ezra Jack Keats Honor Book. Adam's illustrations have appeared on book covers and in numerous print publications, including the New York Times and School Library Journal. He lives with his family in Brooklyn, New York.

Praise for Legendary Creatures:
An Amazon Best Book of the Month

"A gallery of strange creatures of lore, from dragons to eaters of gold and dreams....young monster hunters may find some fresh quarry."—Kirkus Reviews