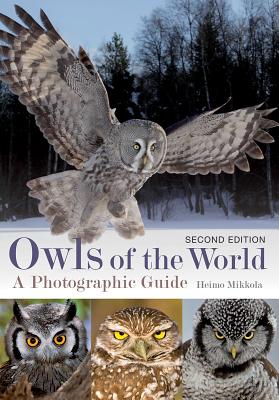 The superlative identification guide to 268 species of owl, now in paperback.

Praise for the first edition:

A native of Finland, the author is the world's best-known owl expert, having visited the birds in 128 countries over the past 40 years. Here he describes all of the world's 249 species of owls in copious detail with tips on identification, habitat, calls, and status and distribution. The text is enhanced by 750 color photographs from leading wildlife photographers. A spectacular book. --Library Journal, Best Reference 2012

An] important book. Recommended for most libraries -- good value and quality for the price. --Booklist

Owls of the World, second edition, is the ultimate photographic resource dedicated to the identification of these charismatic birds of prey. It is packed with spectacular photography of 268 species of owls from all over the world, including extinct species. Many of the images are of highly elusive species very rarely caught on camera. The photos are accompanied by authoritative text describing:

The photographic coverage includes plumages and subspecies which promotes differentiation between species, making this the definitive work on owl identification. Similar-looking (confusion) species are included and owls are shown as adults from a perspective which clearly shows markings that assist in identification.

For birders, naturalists, wildlife photographers, researchers and any fan of the Order Strigiformes, Owls of the World is the definitive work on species identification as well as a comprehensive encyclopedia for reference and pleasure.

Heimo Mikkola is the world's best-known owl expert. Originally from Finland, he has traveled to 128 countries in the course of his 40-year research career in search of nocturnal birds.


Owls of the World: A Photographic Guide (Paperback)