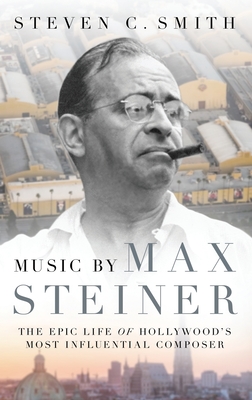 During a seven-decade career that spanned from 19th century Vienna to 1920s Broadway to the golden age of Hollywood, three-time Academy Award winner Max Steiner did more than any other composer to introduce and establish the language of film music. Indeed, revered contemporary film composers like John Williams and Danny Elfman use the same techniques that Steiner himself perfected in his iconic work for such classics as Casablanca, King Kong, Gone with the Wind, The Searchers, Now, Voyager, the Astaire-Rogers musicals, and over 200 other titles. And Steiner's private life was a drama all its own. Born into a legendary Austrian theatrical dynasty, he became one of Hollywood's top-paid composers. But he was also constantly in debt--the inevitable result of gambling, financial mismanagement, four marriages, and the actions of his emotionally troubled son. Throughout his chaotic life, Steiner was buoyed by an innate optimism, a quick wit, and an instinctive gift for melody, all of which would come to the fore as he met and worked with luminaries like Richard Strauss, George Gershwin, Irving Berlin, the Warner Bros., David O. Selznick, Bette Davis, Frank Sinatra, and Frank Capra. In Music by Max Steiner, the first full biography of Steiner, author Steven C. Smith interweaves the dramatic incidents of Steiner's personal life with an accessible exploration of his composing methods and experiences, bringing to life the previously untold story of a musical pioneer and master dramatist who helped create a vital new art with some of the greatest film scores in cinema history.

Steven C. Smith is a four-time Emmy nominated journalist, writer, and producer of over 200 documentaries about music and cinema, including The Sound of a City: Julie Andrews Returns to Salzburg (2015); A Place for Us: West Side Story's Legacy (2011); The Lure of the Desert: Martin Scorsese on Lawrence of Arabia (2013); Passion, Prejudice and South Pacific: Creating an American Masterpiece (2009); and Thou Shalt Not! Sex, Sin and Censorship in Pre-Code Hollywood (2008). He is the author of A Heart at Fire's Center: The Life and Music of Bernard Herrmann (1991).

Music by Max Steiner: The Epic Life of Hollywood's Most Influential Composer (Hardcover)