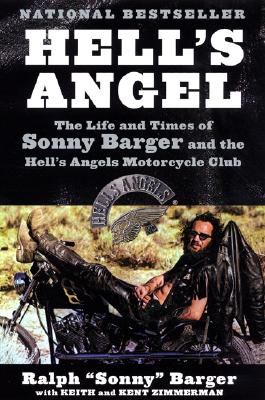 By Sonny Barger
Email or call for price
Special Order

The only authorized, authentic book about the Hell's Angels Motorcycle Club by founding member, Sonny Barger—featuring a brand new introduction

Narrated by the visionary founding member, Hell's Angel provides a fascinating all-access pass to the secret world of the notorious Hell's Angels Motorcycle Club. Sonny Barger recounts the birth of the original Oakland Hell's Angels and the four turbulent decades that followed. Hell's Angel also chronicles the way the HAMC revolutionized the look of the Harley-Davidson motorcycle and built what has become a worldwide bike-riding fraternity, a beacon for freedom-seekers the world over.

Dozens of photos, including many from private collections and from noted photographers, provide visual documentation to this extraordinary tale. Never simply a story about motorcycles, colorful characters, and high-speed thrills, Hell's Angel is the ultimate outlaw's tale of loyalty and betrayal, subcultures and brotherhood, and the real price of freedom.

Ralph "Sonny" Barger is the author of Hell's Angel: The Life and Times of Sonny Barger and the Hell's Angels Motorcycle Club. A master mechanic who has owned and operated his own bike shops, he currently lives in Arizona, where he rides every day.

“Barger’s autobiography is about as subtle as a kick in the groin, and that’s what’s so refreshing about it.”
— San Francisco Chronicle

“One of the best books of the year.”
— Maxim

“Not your ordinary book…A peek at another side of America.”
— Tulsa World

“A ripping good read…as gripping a tale as you would expect from the most famous pack of all time.”
— New Times Los Angeles

Hell's Angel: The Life and Times of Sonny Barger and the Hell's Angels Motorcycle Club (Paperback)