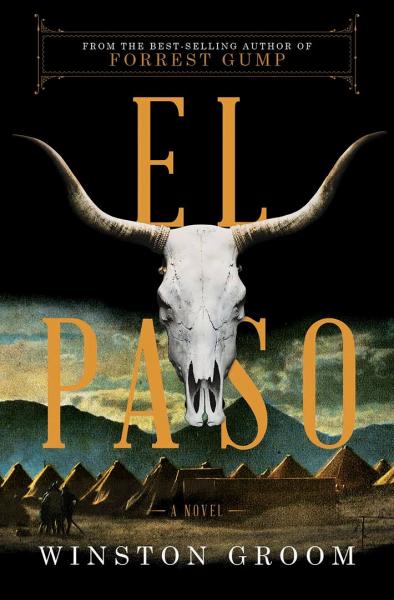 Winston Groom is an excellent author and historian of the first water. He is responsible for, among many other fine works of history and historical fiction, the creation of one America's most popular and iconic literary characters, the irrepressible and ingenious enfant naïf "Forrest Gump". Since the release of "Forrest Gump" Groom has confined himself to writing several fine works on the subject of American history, notably, "Kearny's March: The Epic Creation of the American West, 1846-1847", "The Aviators: Eddie Rickenbacker, Jimmy Doolittle, Charles Lindbergh, and the Epic Age of Flight" and just last year "The Generals: Patton, MacArthur, Marshall, and the Winning of World War II", among others. This is his first novel in at least a decade.

It has been a long time since I've read a good Western novel so I was excited to see Groom's "El Paso" hit the shelves a few weeks ago. I confess that I was mostly drawn to its genre and evocative cover art, at first not connecting Mr Groom's name to his best-known work, the aforementioned "Forrest Gump". It seems that Groom is one of the least well-known of America's best-loved authors, due the fact, most likely, that the cinematic production of his best-known character has so totally eclipsed his literary creation. There is also a passing reference and comparison on the jacket to Larry McMurtry's "Lonesome Dove" in which austere company "El Paso" definitely belongs, in scope, subject, and literary achievement, if not in style and composition.

"El Paso" tells the story of young Arthur Shaughnessy and his adoptive father John Shaughnessy, aka "The Colonel". Colonel Shaughnessy (an honorific unrelated to any type of military service) is a railroad baron of the old style. At a time when railroad companies and the track they traveled were privately owned, and fiercely competitive, he had distinguished himself by taking the New England & Pacific Railroad Company, after winning it in a backroom game of craps, and turning it into an economic engine of considerable success and fortune. After grooming his adopted son for the task of running the railroad, and installing him at its head, he embarks on a life of excess, adventure and ostentatious leisure aboard the Ajax, an ocean-going yacht of epic proportions, There is only one small problem, the NE&P Railway is nearly broke and will not maintain the lifestyle to which The Colonel has grown so fondly accustomed. The only hope for Arthur to meet the next payroll is borrow against the Ajax. His plan is then to sell the cattle from The Colonel's vast ranch in Chihuahua, Mexico to acquire an infusion of much-needed cash to be used for capital improvements and re-investment. General Pancho Villa, who has just taken over the ranch in a bloody gun battle has other ideas, he plans to use the ranch's cattle and resources to re-launch his flagging Revolucion mexicana. Villa seizes the opportunity to gain leverage against The Colonel by kidnapping his grandchildren when the family comes to Chihuahua to survey their Mexican holdings.

The Colonel and Arthur embark on an incredible and dangerous journey to rescue their family. As they make their way through the high mountains of the Sierra Madre Occidental on the trail of the kidnappers their resolve, their courage and their relationship to each other will be sorely tested. In the course of this journey Groom will introduce us, and the rescuers, to many historical figures who have important roles to play in this epic and fascinating novel.  Before it is all said and done President Wilson, Tom Mix, Ambrose Bierce, and Generals Pershing and Patton will make their appearance to help or hinder the Shaughnessys in their daring and dauntless quest to save their children. I am enjoying this book immensely, the prose is perfect, the characters intense and believable and the story absolutely compelling.

To purchase this book: